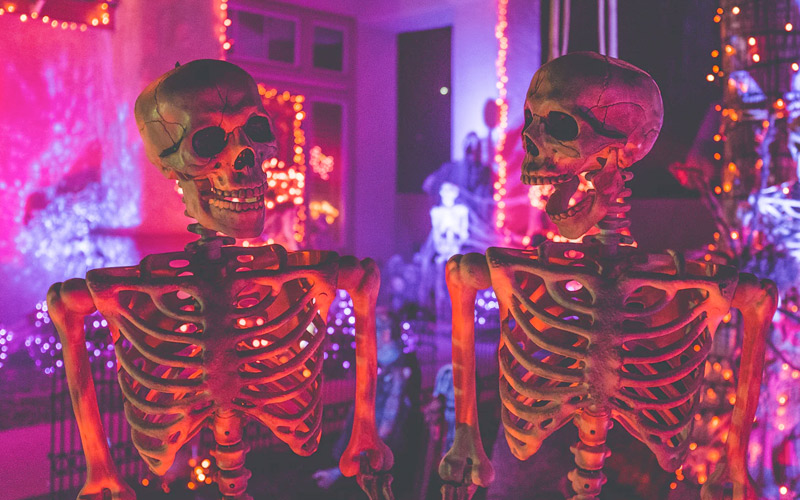 Halloween is right around the corner, or if you’re reading this at a later date, it’s coming up sooner or later! In either case, here are some ideas for fun Halloween party games for teens to play.

Some of the games may require extra stuff, others can be played with nothing more than a group of willing participants.

Do you think you’ll end up trying any of these Halloween game ideas for teens?

This is a pretty classic party game because it’s stood the test of time. You fill up a bucket, a container of some sort, a Rubbermaid, whatever with water. Put a few apples in it, and players have to try to pick up an apple from the bucket using their mouths and teeth. You can put some red food coloring or juice into the water to make it look like blood, too, which gives this game a spooky Halloween twist.

You can keep score by timing how quickly everyone is able to get their apple out, where the fastest time is obviously the winner.

2. Apple Race is a Fun Halloween Party Game for Teens

If you’ve got some apples leftover from the previous game of bobbing for apples, set them up along the floor a few feet apart. Players get onto their knees and have to push the apple from point A to point B using nothing but their noses. This game can get pretty hectic, and it’s good to make sure you have a large enough room, you don’t want to end up with any collisions that lead to sore faces.

The best strategy for this game is to take your time and not rush it. Move with conviction and precision, rather than losing control and ending up first-face on the carpet or floor.

The more people there are, the more hectic this game can become. You could also play another version of this game where you can know move the apple by pushing it with your knee, your elbow, or your forehead. You can do multiple races with different sets of rules, and it ends up being a pretty fun Halloween party game for teens, and it’s hilarious to see everyone crawling around, pushing apples in their Halloween costumes.

3. Wrap The Mummy Is One Of The Most Fun Halloween Party Ideas for Teens

The first person either spins in a circle, until the whole roll is wrapped around them, or the second person holding the roll runs around them in circles – just make sure everyone is playing the same way!

If the roll rips, they lose that round. It’s the first team to unravel the whole roll and wrap one of the team members from head to toe, just like a mummy.

Think of a series of little challenges that people can do, kind of like the show fear factor but not nearly as intense unless you want to ruin some friendships!

This version can have things like reaching into a hole in the side of a shoebox to try to guess what’s inside, you could use things like gummy worms, slime, grass clippings, fake spider webs, and whatever else. Maybe if you practice mindfulness for teens, you’ll be able to tap into a state of mind over matter and overcome your fears with a Fear Factor Halloween game.

If you want to freak people out a bit and play a game that’s genuinely scary, look up some facts and stats about various true crimes, serial criminals, and all of that. It’s scarier than generic horror movies because it’s all true stories. Here, here and here are a few existing quizzes that you can borrow some questions from (we won’t tell them!) If you ever find yourself relating with the perpetrators in a true crime story, it might be time to consider anger management for teenagers.

You’ve probably done Easter Egg hunts, right? This is the same idea. Stick with pre-wrapped candies, the same kind of stuff you would hand out to kids who come to the door.

Someone needs to hide the candy all around the yard or the house, but if you’re hiding candy outdoors, it’s your responsibility to keep track of how many you hide and where you put them. You don’t want to leave them out long enough for animals to try to get at them and to end up choking on the wrappers.

You can’t go door to door for candy, depending on where you live and how safe your family is being, but you can still hide candy around the home and go on a scavenger hunt which is a lot of fun.

7. The Pumpkin of Dares

If somebody finds an empty wrapper in the Candy Hunt (described above), you can tell them they have to reach into the pumpkin and pull out a random dare.

Next level: Remember, if you put something too crazy in the Pumpkin of Dares, there’s still a chance that you’ll end up pulling it out yourself, so let’s not go too crazy here.

Take a set amount of candy corn, fill up a jar (or a few smaller jars), and then have people guess how many candies are in the jar.

The winner, of course, gets the candies! But it might not be the best idea to be handling each and every candy and counting them out by hand and then having people eat them, so take it to the next level for a better plan.

Next level: Count the candies as you put them in the jar, write down the total on a paper somewhere, and then have people guess how many candies are in the jar.

Give the winner a sealed bag of candy corn instead of the ones that were opened and put into the jar. You can toss the ones that are in the jar for hygienic reasons, or keep them for yourself and enjoy them later (since you’re the one who counted them and touched them, anyways!)

Here’s a game suggested by CloserOnline. For this Halloween party game for teens, you have to take some random things and put them into bowls. You can put a box on top of the bowl, with just enogh room to stick your hands through th eside, so that peple can’t see what’s inside the bowl.

So, we’re leaving out one crucial detail here if you haven’t noticed, and that’s to fill the bowls with a variety of different textures, from spaghetti noodles, gummy worms, a packet of scalloped potatoes that has been sitting in water overnight, some regular old fashioned mud, and anything else that you can think of that will be slimy and have a gross texture. Then, people try to guess what each thing is by feeling it.

“Toilet-papering” houses is off the menu this year, sorry kids! If this year has taught us anything, it’s that we should not be wasting any toilet paper. Plus, it’s just not a good time to add any extra stress or trouble to anyone’s life, like them having to worry about how to get the TP out of their trees and whatnot.

Maybe in past years this prank, albeit still pretty mean under some circumstances, could pass – but you just don’t know what people are going through this year in particular, so chill out on things like egging houses or TP’ing houses.

Generations of teens have gone out on Gate Night and done stuff like this, but it’s becoming less and less common, and that’s a good thing. Halloween party games for teens shouldn’t involve ruining anyone’s day.

Make Your Own Halloween Games for Teens

You can even make your own Halloween games for teens based on the games that we’ve recommended on this page, or from scratch. If you come up with any cool ideas for games, let us know! Halloween party games that work with any number of people are great if you want something a bit more casual since you don’t need to know exactly how many people will be attending.