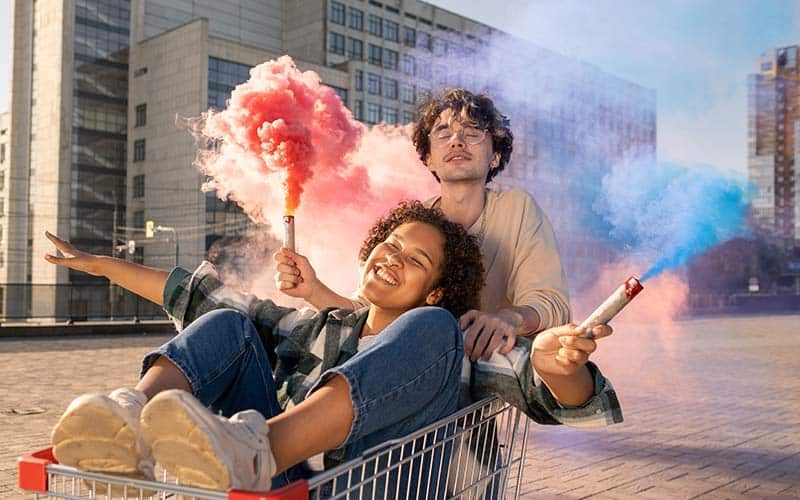 Some of the funniest memories come from playing hilarious teenage party games, it just puts everyone at ease and having a fun time and can lead to very memorable moments.

We’ve put together a list of hilarious party games for teens that you can try out the next time you’ve got a group of friends together for a birthday party, or just a house party / get together.

Some of these are actual games that you can buy at a store, and some of them are games that you can play without having to buy an actual game. For the made-up games, please keep in mind that the rules are just a rough guideline, we strongly encourage you to be creative and to put your own twist on them, so if the rules to any of these hilarious party games seem a bit vague, that’s where you’re meant to fill in the blanks yourself with rules that make sense for your group.

These are the most hilarious teenage party games that I’ve had the experience of playing and enjoying a lot. There are some better games out there, if you prefer more serious games and what have you, but if you’re just looking to laugh and have a blast and that’s the main priority, I hope you’ll love these games as much as I do!

1. Apples to Apples / Cards Against Humanity

These two games are essentially the same, except Apples to Apples is the original family-friendly version and Cards Against Humanity is the edgy version.

Apples to Apples has a lot of wholesome, fun, and age-appropriate cards for people of all ages. It’s not going to be particularly awkward if you’re playing it with your friends, or your grandparents, or even random strangers who don’t know your sense of humor.

Cards Against Humanity, on the other hand, uses a lot of edgy and dark humor, and could be pretty awkward to play with certain groups of people. If you and your friends enjoy this type of humor and aren’t easily offended, Cards Against Humanity can be absolutely hilarious to play at a party.

Monikers is a new take on the classic game of Charades, it’s quote similar but with a slightly different format and structure.

This is a great game to play with a group of friends, and it’s absolutely hilarious to see the clues people come up with, and the guesses that their teammates will use to try to win the game.

How fun and funny the game Monikers ends up being really depends on the group you’re playing with. If it’s a more laid back group of people, or shier kids who aren’t going to really get into it and let loose, it might not be as fun.

But it’s also a great game to get people out of their shells, even if it takes a few rounds for people to get comfortable being really silly. Once it gets going, Moniker is a great example of a hilarious party game for teens.

The Jackbox Party Packs are based on the classic PC game called You Don’t Know Jack, a trivia game that has now evolved into a collection of mini games that are perfect for playing as a group.

Jackbox can be played locally as a group using your cellphones instead of game controllers, or you can play it remotely where each player is at their own home.

It’s versatile, with a ton of variety, and game styles that mean every player has a shot at winning – whether they’re a skilled gamer or more of a casual.

Not only that, but there’s huge potential for making jokes and being silly. All around, Jackbox is one of the funniest collections of games, and perfectly hilarious to play at parties. If you’ve got a group of teenagers to entertain, this is the perfect digital game for the job.

This is more of an activity than a game, but it’s still something that’s really fun to have at a party that will also help create memories.

Hit up the dollar store, empty out any weird outfits or costumes or accessories from the back of your closet, make a trip to the thrift store, and you’ll have no trouble putting together some stuff for a really fun photo booth.

Encourage your friends to take silly photos with all the accessories you’ve compiled, see who can come up with the funniest scenes, and you’ll quickly realize why a photobooth is a super hilarious activity for teen parties.

5. Get a Karaoke Machine

Okay, here’s another idea that’s more of an activity than a game, but that’s okay! Karaoke is a staple at parties and has been for decades. It’s never been easier to get karaoke going than it is now, since there are apps for cellphones, singing games for the PC and consoles, and even classic karaoke machines themselves are pretty affordable.

You can also rent karaoke machines, but all you really need is a computer and a microphone and you can even use YouTube karaoke videos. Suffice to say, it’s easy to set up karaoke on a budget, or you can go all-out and rent light machines, a fog machine, a small stage, and really go for it.

Either way, karaoke leads to all sorts of laughs and hilarious memories at a party. Why not pair it with some costumes from the photobooth and see who can put on the most memorable performance?

Let’s wrap-up this list of hilarious party games for teenagers with the classic: Would You Rather. There’s a retail version of this game that you can buy, but all you really need is a list of would you rather questions for teens.

This is a great conversation-starter and can lead to people saying some absolutely hilarious and ridiculous things. If you have a “Cards Against Humanity” type of sense of humor, half the fun or more comes from seeing who can come up with the most ridiculous questions that are hard or nearly impossible to answer.

The challenge is coming up with questions that really require some thought, where there isn’t really a clear right or wrong answer because both answers are either so great, or so terrible, that it’s hard to choose one.

Would You Rather can be one of the most hilarious teenage party games, so give it a try next time you’ve got a group to play with!

Any of these hilarious teenage party games are only going to be as fun as the people you’re playing them with, but what makes a game great is when it can bring shy people out of their shells and gets everyone involved, acting silly, and having a great time.

These are some of my favorite hilarious party games for teens and I hope that you’ll enjoy them, too. As I try new games and have fun with them, I’ll make a point to come back and update this list to add more and more hilarious teenage party games so hopefully we’ll see you back here again someday!