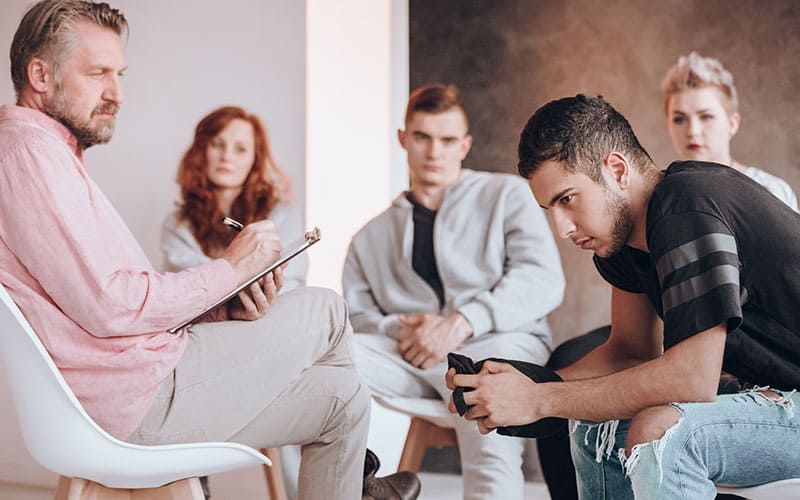 The teenage years are filled with hormones, and it’s a time when past traumas can really start to manifest for people who had really tough childhoods.

Not everybody who is angry is acting out of some type of past trauma necessarily, but empathy can go a long way when trying to deal with angry teenagers.

It’s difficult because they could be treating you very poorly, even though you’re trying to help them. Remembering that it’s difficult for the angry teenager, too, is a helpful technique before even considering anything else.

Wanting to help somebody that is dealing with anger is a noble pursuit, and it will take a lot of patience and you’ll probably want to give up plenty of times.

Finding an anger management class or a mental health professional can be a great way to gain insights into what’s causing a teenager to feel angry. A therapist can help them understand what’s going on in their mind that’s causing them all of this pain, because anger is often a response to pain, in one way or another.

It could also be that they just aren’t able to cope with whatever is going on in their life, and sometimes that’s perfectly understandable. But it’s not an excuse to avoid getting help.

If you have a teen in your life who is dealing with anger management issues, then helping to find them someone to talk to about it can be one of the best things you can do – but there are also some other techniques and strategies that you can employ, too.

Physical Activity of Some Sort

Some experts recommend getting some physical activity as a good way for someone in their teens to blow off some steam. This isn’t a magical cure-all for everyone, especially in someone who is prone to unexpected outbursts that can’t be predicted, but some solid physical activity every day or two can help to bring the overall pressure down a bit, so that the next outburst might not be as bad, or could be avoided altogether.

Physical activity like playing a sport, or even just going for a peaceful walk around the block a few times, can be one of many useful tools. On it’s own, it may or may not be enough, it really varies from person to person, but it’s absolutely a great tool to have in your toolbox of strategies to deal with teenager anger.

Here’s a video by Dr. Christian Conte, along with a quick breakdown of what the 5 keys are. You can watch the video to hear a more in-depth explanation of each of these keys to managing your anger, all of which apply to teenagers as much as anyone else.

Here’s an interesting TedTalk by Juna Mustad, who discussed taking a mindful approach to the problem of learning to manage and control one’s anger.

Everyone Deals With Anger, It’s How We Control It…

Everybody deals with anger, but some people have it a lot worse. Someone could have less anger, either because they’re controlling it very well, or they simply have a much lower baseline for anger. Just because someone seems pleasant and easy to get along with all of the time, that doesn’t mean they aren’t working very hard to control their anger and their demons.

Anger Management for Teens is So Important, Because…

If someone has anger issues as a teenager and they don’t deal with them, there’s no guarantee that they’ll just wake up one day and grow out of it. That’s not really how it works. Of course, some people will mature as they age and they’ll learn to better control their anger, and they could very well get over some of the issues that were troubling them as teens, not to mention that the witch’s brew of hormones will have subsided as they age. Still, anger issues in teens are not something to avoid because they can get someone into some real trouble, and they can make this period of life much more difficult than it needs to be.

In addition to the stuff we’ve outlined above, here are some other anger management activities for teens to help them get through a difficult time.

If You’re Struggling With Anger Management for Teenagers…

By overcoming these challenges, you can work on things like improving the habits of highly effective teenagers to help you throughout life. Learning how to deal with anger and frustration and gaining a different outlook on life will help you gain the capacity to focus on more important things, like moving forward in your life instead of letting anger hold you back.