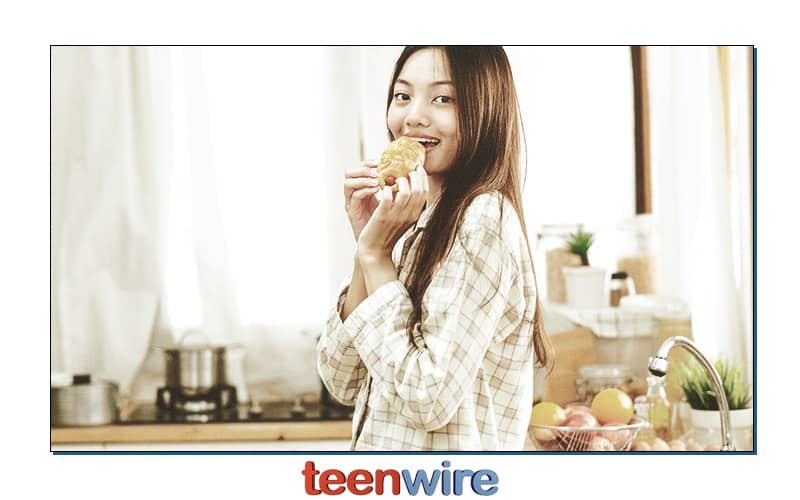 It can seem like teenagers can eat an infinite amount of food, and that’s becasue their bodies are growing quickly, they’re going through puberty, and they’re also usually pretty busy which means they’re burning off a lot of that food.

But when someone eats a lot, there’s also potential to gain weight. A certain amount of weight gain is perfectly normal and healthy for teenagers, and there are plenty of factors than can impact this. Namely, puberty plays a big factor in teens gaining weight (especially among girls, but also for boys who grow taller and put on more muscle).

It’s important that teens don’t hate their bodies or become too self-conscious, and this fact should be at the forefront of this conversation.

Having said that, if a teenager has put on some extra weight, the most effective way for anybody to manage their weight is to take note of the foods they’re eating.

If a teenager, or anyone for that matter, wants to lose weight then they’ll need to consume fewer calories than they’ve been consuming.

On the other hand, some teens are below-weight and have to work to gain some weight. In these cases, it’s often a matter of their metabolism picking up due to the aforementioned reasons, and the teenager not eating more to compensate for all of the extra calories they’re burning.

With all of that preamble out of the way, let’s get to the main question…

How Many Calories Should Teenagers Eat in 2023?

Teenagers should eat between 2200 and 2800 calories per day.

However, if a teenager is looking to put on mass or gain weight, then they’ll want to go above that number.

If a teenager is looking to lose weight, they’ll want to go a bit below that number.

When we talk about going above or below those targets, there are a number of factors that can influence this.

If a teenager wants to maintain their weight and is very active, they’ll need to eat above that amount. For example, someone who spends hours a day playing sports and exercising will be burning a lot more calories than a teen who spends most of their free time gaming.

If a teenager is going to eat less food in order to lose weight, start with just 100 or 200 calories below the goal and see how it feels.

It’s not a good idea for teenagers to starve themselves or to cut their caloric intake drastically.

The 2200 calories for girls and 2800 calories for guys isn’t written in stone. Different people can have different basic metabolic rates, which means the amount of calories they’ll burn throughout the day.

Don’t Become Obsessed With How Many Calories a Teenager Should Eat!

Generally speaking, somebody will know if their eating too much or not eating enough.

Counting calories for a week or two is a great way to get a feel for how much you’re typically eating in a day. Make a point to read the labels and actually measuring things.

For example, it’s really easy to stack up a few hundred unexpected calories between things like salad dressing or peanut butter, or butter and olive oil. They’re all very calorie-dense and add up quickly, so if you’re gaining weight and not sure way, start by looking at your caloric intake closely.

But don’t get obsessed with counting calories!

Teens are going to grow, put on weight, or sometimes they’ll grow faster than their appetites do and they’ll lose some weight. All of this is pretty normal, as long as it’s not drastic.

So, if a teenager wants to put on some weight, they should eat more than the 2200/2800 guidelines and see how it goes, then adjust accordingly. If they want to gain more weight, start eating a bit more each day.

If a teenager wants to lose weight, they should start by getting a good handle on how many calories they’re eating each day, and aiming to stay a little bit below 2200/2800. Take a month and see where they end up. If the progress isn’t happening, then aim a little bit lower, do that for a month, see how things go, and once again – adjust accordingly.

Final Thoughts on How Many Calories Teens Should Eat

This is a time in their lives where teenagers can work to build healthy habits and relationships with food. Worrying and counting every little calorie isn’t something that most teens need to do.

If a teenager is trying to put on, or lose, a little bit of weight then having daily caloric goals is a helpful yardstick in achieving that goal and the first step towards that is knowing how many calories a teenage should eat.