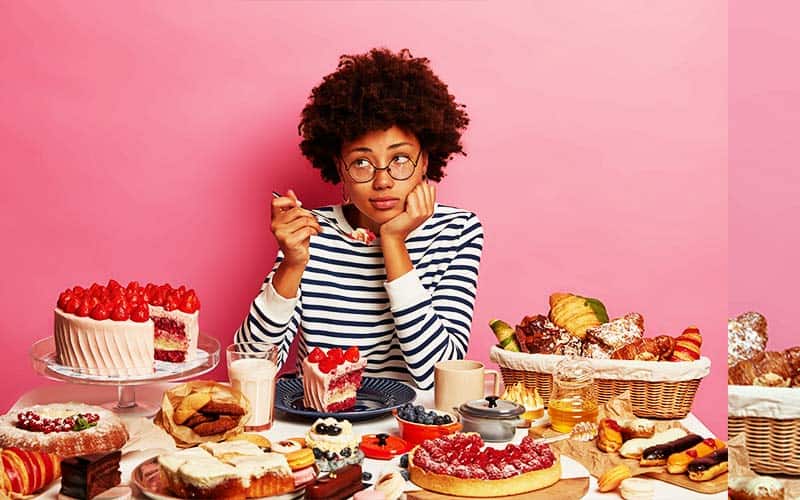 Weight gain in teens can be a very tricky topic. The first thing to keep in mind is that some amount of weight gain is not just perfectly normal, but it’s inevitable. Teenagers are growing quickly, with increased appetites compared to their younger years, and growing bodies will weigh more than smaller kids.

Between the natural growth that happens as kids and pre-teens grow into their teenage and adult years, and increased appetites for teenagers, and the potential to start having a less-active lifestyle, just about every single teenager on the planet is going to gain weight so that’s normal – however, there’s a point where these factors can come together and set the stage for weight gain that can start to cause problems.

If you’re a teen and you’re gaining a little bit of weight each year, this can be a totally normal part of puberty and growing up. If you find yourself gaining weight more rapidly without any major changes to your diet or exercise levels, this could be a sign of a thyroid problem or some other type of issue that would be worth getting checked out.

If you’re gaining too much weight and you’re concerned about that, pay attention to how many calories you’re eating, how much you’re moving around, and just reduce the caloric intake a tiny bit while ensure that you’re at a healthy level.

To parents and caregivers: If you’re concerned with teenage weight gain in someone you know, and you’re wondering why do teens gain weight so that you can try to help them, make sure you approach this very carefully. Many teens are going to feel very uncomfortable if you start making comments about their body and weight, in fact that applies to people in general. If they’re gaining excess weight, this is something you can discuss with them, but make sure you’re very thoughtful about how you approach this. Understanding the reason for the weight gain can be a helpful tool in deciding if you even want to or should bring it up with them in the first place.

Teens gain weight for a variety of reasons. Here is an overview, but it’s not a comprehensive list since there can be more obscure reasons, too. If you’re unsure what’s going on, and it can’t be explained by anything else, you should consult with a doctor or another healthcare professional to determine the cause of the teenage weight gain, but generally speak, it will be one of the following things or a combination of them.

Puberty and growth spurts will contribute to weight gain in the teenage years. During these times, you’ll probably find yourself being a lot more hungry than usual, and this endless teenage appetite combined with the next thing (eating unhealthy foods) is a recipe for weight gain.

It’s not uncommon for a child to gain around 5-10 pounds the year after they start puberty, but this can be a bit more for girls, and is just a rough guideline. That’s approximately the amount of weight gain that can be attributed to puberty itself, but things like hormonal changes and an increased appetite can easily lead to a greater amount of weight gain, especially when combined with the rest of the items on this list.

Teens usually start to have a bit more control over their meals compared to younger kids whose meals are generally chosen for them. This means a lot of teens may start to go off the rails a bit when it comes to neglecting healthy meal choices, instead filling up on things like sweets, chips, and fast food.

Between unhealthy foods being easy, fast, and cheap and teens not paying too much attention to what they eat, even with a faster teenage metabolism, the weight can start to creep up, especially when combined with some of the hormones and stresses that come from being a teenager.

These types of foods usually have a ton of calories without being very filling, like a bag of chips or sweet drinks from Starbucks can add up to a day’s worth of food quite easily without being filling at all.

Stress is linked to weight gain and the teenage years can certainly be stressful. It’s not necessarily stressful in the same sense as adulthood when you have bills and a household to manage, but when you’re a teen, you have teenage stuff to deal with and it feels very stressful at the time. Not to mention the numerous teens who are going through difficult times that would be stressful by anyone’s standard.

Dealing with stress can lead to using food as a coping mechanism, and it’s not a good one. Take a look at some healthier coping skills for teens.

Some people who go on birth control pills will report gaining a little bit of weight and the same has been said about various anxiety medications – but that’s a small price to pay for the benefits of a medication that has been prescribed. There are other types of medications that can lead to weight gain but obviously when it comes to things have been prescribed, taking the medication correctly is the top priority.

As kids grow into their teenage years, they may find themselves with less time to run around outside and spending more time online, studying, or just staying in. Add the fact that a lot of teenagers need more sleep, and there’s just less time spend being active which can lead to less energy being burnt away, which translates into weight gain.

The way to counter-act this is to just try to stay more active. If you live close enough to school to walk home, consider taking the walk sometimes instead of getting a ride, or come up with a workout routine you can do at home. You could also join a team sport, or taking online dance lessons, or any number of other ways to stay more active.

Frequently Asked Questions About Why Do Teens Gain Weight

Here are some commonly asked questions on this topic, along with answers, to help you find everything you’re looking for in one place.

Why is my teenager gaining weight?

There are a number of reasons that a teenager could be gaining weight and most of them are perfectly normal and to be expected. Some of them can be prevented, or taking into consideration if a teenager is gaining too much weight outside of what one would expect to normally gain during puberty.

Is it normal to gain a lot of weight during puberty?

That depends on what you mean by “a lot”, but it’s certainly perfectly normal to gain weight during puberty, it would be unusual not to. There’s a range that can vary based on a number of factors like age, height, size, and so on. Some kids will gain more than others from puberty on its own, and then there are all of the other factors that can lead to weight gain in teenagers.

Why do teenage girls gain weight during puberty?

Will I get skinnier after puberty?

According to a question that was answered at Healthshare.com.au: “Lean body mass in girls diminishes from approximately 80 percent to 75 percent by the end of puberty, while the amount of body fat increases. In comparison, the percentage of lean muscle mass in boys increases from about 80 percent to 90 percent by the time they reach adulthood.” (source)