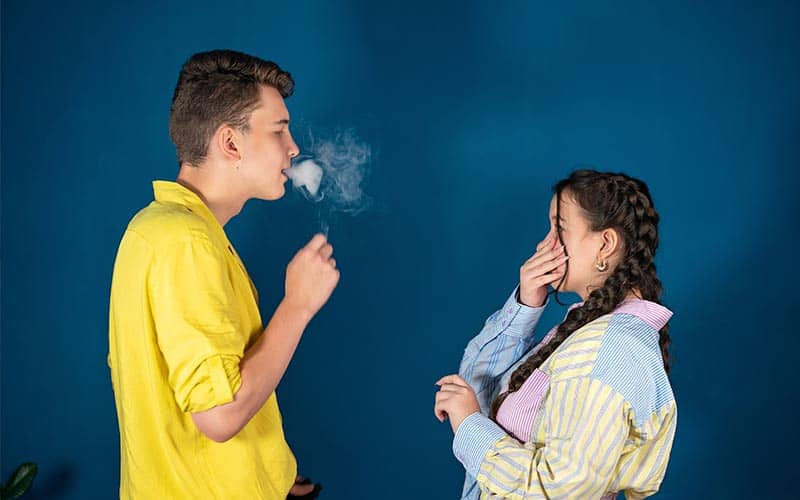 In this day and age, you may find yourself driving by a high school and seeing all the kids out next to the dumpster smoking cigarettes, and you might stop to ask yourself, “Why do teens smoke?”

There’s so much media, advertisements, warnings, and it’s been decades since cigarette companies were advertising with Doctors telling people it’s healthy to smoke, so why does this habit still linger?

There are plenty of reasons that teenagers start smoking, and the reason they keep smoking is because it’s incredibly addictive and hard to quit!

If you’re a parent and you’ve noticed that your teen has started smoking and you’re trying to learn more about why they’re doing it, you’re in the right place and you’re also a really great parent.

Instead of busting down their door and searching their room from top to bottom, you’re treating them like a mature person who can make decisions, and that’s going to go a long way when it’s time to sit them down for a chat.

Also, if you’re a teen yourself and you’re wondering why your friends are starting to smoke, maybe you think they’ve lost their minds, then you’ll find some interesting tidbits here, too. You’re also a solid friend for caring about them, and for not giving in to the peer pressure yourself.

Finally, if you’re a teen who has started smoking, or is thinking about, and you’re wondering why you’re even finding this appealing in the first place, well, you’re a super introspective person and you’re probably going to come away from this not wanting to smoke anymore, but that’s ultimately a decision you’ll make for yourself.

Why do teenagers smoke? For a lot of reasons, here’s what you need to know!

Here are just some of the most common reasons that teenagers might start smoking or keep smoking once they’ve started this habit. Each teen’s own reasons could be a combination of these, to varying degrees, or other things altogether. Knowing why teens start smoking can help you figure out the best way to help them quit.

Teens Start Smoking Because They See Their Parents Smoking

If a teenager’s parents smoke, they will have grown up seeing cigarette smoking normalized in their homes, and they might look at their parents and think “Well, you guys are fine, so I’ll be fine if I smoke.”

The Tobacco Industry Is Very Powerful and Influential

In past decades, tobacco companies could advertise in all sorts of wild ways that would make smoking seem very cool and hip. It’s died down a bit over the years as laws and regulations have limited what they can get away with, but there’s still plenty of places in popular media where you can see “cool” people smoking and enjoying cigarettes, and this can have a huge impact on people deciding to start smoking.

Even these days, when everyone knows how dangerous smoking can be, and all of the risks associated with it, people still smoke because the negative effects of smoking can feel like some abstract thing you’ll have to deal with in the future, rather than something that will have a more immediate impact on you.

There are places in the world that don’t have the same strict rules for advertising cigarettes and other tobacco products, too, so that has a huge influence on why teens smoke in those countries.

Teenagers are exploring the world, they have lots of new opportunities and new freedoms, and that can lead to trying cigarettes, too. It’s not the only forbidden thing that teens will experiment with, and it won’t always turn into a full-blown smoking habit or addiction, but it certainly can and it certainly does.

Some teens will look for ways to push the boundaries, and starting to smoke is one of those ways. It also gives a head-rush like feeling and a calmness that can become addictive, especially among teens who are still learning coping skills, it can feel like a shortcut, perhaps.

Teens also don’t always have the ability to see the consequences of their actions, especially when these consequences don’t play out until many years into the future.

With smoking, you might not experience the negative effects right away, it could take a while for the really serious stuff to happen. There can, obviously, also be negative shorter-term effects like being short of breath more easily.

Teens Smoke Because of Peer Pressure

Peer pressure is very powerful, and it’s been hinted at during some of the other items on this list, but it also deserves its own section, too. If a teen doesn’t have parents who smoke or who they’ll take cigarettes from, a teenager who starts smoking will probably get the cigarettes from their friends.

It could be friends with older siblings, or a friend whose old enough to buy cigarettes themselves. In any case, there can be peer pressure in some groups of friends to start smoking, even if it’s not a conscious thing people are doing. Just being around cigarettes and seeing your friends smoking can encourage you to try it.

Teenagers Smoke Because They Like How Nicotine Makes Them Feel

This follows up on the previous point. Nicotine can feel relaxing while also giving a bit of a rush, at least when people first start using it. Soon, though, it loses those effects and basically just quenches the craving that people get without really giving the same nice feeling it may have at first.

This can cause people to smoke more and more often, which makes it even harder to quit as more time passes. It’s a really bad situation to get in, because it’ll never feel like those first few cigarettes again, but some people will end up getting hooked early on and just continue smoking for years, without even really stopping to realize that it doesn’t feel good at all anymore.

We’ve touched on this already, but it bears repeating. Once a teen starts smoking, there’s a good chance they’ll become addicted to it, but not a guarantee.

If they stop smoking sooner, they’ll have an easier time but it can be hard to convince a teen to stop smoking, especially if their friends are doing it and it’s just something that happens in social situations.

Habits can form quickly, and those habits can be things like meeting up with friends at lunch break and smoking, and once it becomes a social thing like that, there can be pressure to keep smoking. Sometimes, teens will even make fun of their friends for quitting or trying to quit, but thankfully this is becoming more a thing of the past, however it’s still prevalent in some circles.

We’ll be doing a much more in-depth look at the effects of teenage smoking, which you can find here: Effects of Teenage Smoking. Also, we’ve published a handful of additional facts about teenage smoking that may be of interest to you.

So, What Can You Do If Your Teen Smokes?

If you’re a parent with a teen whose smoking, or a friend who is concerned about your friend, these are very valid things to feel worried about. Smoking is bad for them, and you can feel helpless when you aren’t able to convince them to stop.

Cigarettes are powerfully addictive, and sometimes people will need to realize the downsides for themselves, and hopefully they’ll be able to do that before it’s much harder to quit.

You can be there for them, encourage them to quit, and point out the negatives of smoking. As a parent, you’ll have a really difficult time getting ahead of this if you start being very overbearing, it can encourage your teen to further isolate from you and not feel like they can come to you when even more dangerous substances are introduced to their lives.

That’s just something to be mindful of, and when you’re thinking about why do teens smoke, the best answer can be to just ask them and hear it from them.