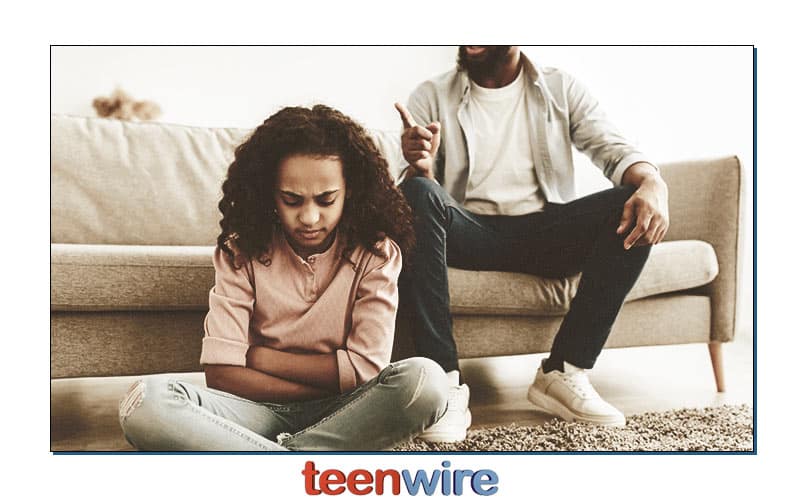 Being a parent to teenagers can be downright discouraging sometimes.

You want to do everything right, you’ve spent their whole lives caring for them and looking out for them and doing your best for them, and then the teenage years come along and it can feel like you’re watching all the work and love you’ve given them starting to crumble.

Nobody likes being screamed at by the kid they brought into this world. It’s not a good feeling.

Parents react to this type of thing differently. Sometimes, the parents will fire back out of anger and then things can get nuclear. It’s yelling, screaming, and trying to hurt one another going in both directions.

A parent should do two things. First, recognize that they’re in the parental role and they need to set a better example of emotional maturity than a literal teenager. Secondly, parents should remember that they’re human, too, and they aren’t always going to act perfectly, especially when they feel like they’re hated by the person they love the most on this planet.

With that out of the way, let’s go over some reasons that teens “hate” their parents, but before we did into why teens hate their parents, let’s talk about the word hate.

Do Teens Really HATE Their Parents?

No, teens don’t usually hate their parents. If you’re the type of parent who is concerned about something like, you probably don’t have anything to worry about since you’re a thoughtful, conscientious parent who cares about their kid.

Hate is a strong word.

In the moment it, it can definitely feel like it. Teenagers are going through a lot, and sometimes they’re better at hiding it than other times.

As a parent, if you take every little thing personally, it’s going to make the teenager years a lot roughing on you and on your teen.

On the other hand, when it comes to typical teenage stuff, where the parent and teen generally have a good relationship, but then the teen starts pulling away, seems angrier, and so on – some level of that is normal teenage stuff.

There’s a difference between a teenager acting like they hate their parents, or just going through normal teenage stuff that they’ll grow out of.

Here’s Why Teens Hate Their Parents:

Now, we’re using the term hate to basically describe the way teens act towards their parents when they’re grumpy, moody, angry, and so on. Here are some reasons that teens behind in a way that makes it feel like they hate their parents…

The teenage years feel like a tug of war between the parents who want the best for their teen and to look out for them, and the teen who wants more and more freedom and control over their own life.

Let’s face it, sometimes parents can be embarrassing. Even when it’s unintentional, the teen can feel like their parent’s behavior is in some way a reflection of them, so they’ll try even harder to push themselves away from that.

They Don’t Think Their Parents Understand Them

It’s easy to feel contempt towards someone when they still have a certain level of power over your life.

Beyond that, when the parents make a decision the teen doesn’t like, it just piles on and feeds into this. The teen feels misunderstood.

They Feel Comfortable Enough To Do So

A teen should feel comfortable enough around their parents to show their emotions, so in a way, this can be a sign that the teen is comfortable even if they’re angry, upset, confused, and all of those other teenage emotions.

Would you rather have a teenager who doesn’t feel like they’re able to express themselves in their own home, to their own family members?

If a teen is lashing out or seems like they hate their parent, it could mean that they need emotional support and they don’t know how to ask for it other than to show how badly they need it.

A teenager might be trying to gain some additional space for themselves which might make them feel like they need to create that space to discover themselves by pushing their parents away.

Final Thoughts About Why Teens Hate Their Parents

If you’re a parent who truly deserves to be hated, it’s hard to imagine that you’re on the internet spending your time looking for parenting advice, and a lot of professionals in the field agree with that sentiment.

Still, it’s never fun to do so much for someone and to feel like it’s being throw back in your face, so if your relationship with your teenager is strained, just recognize that most of that is pretty normal but you can still take steps to try to makes things go more smoothly.

Why do teens hate their parents? This isn’t a new question, it’s been something parents and teens have dealt with since the dawn of time. You’ll be okay.