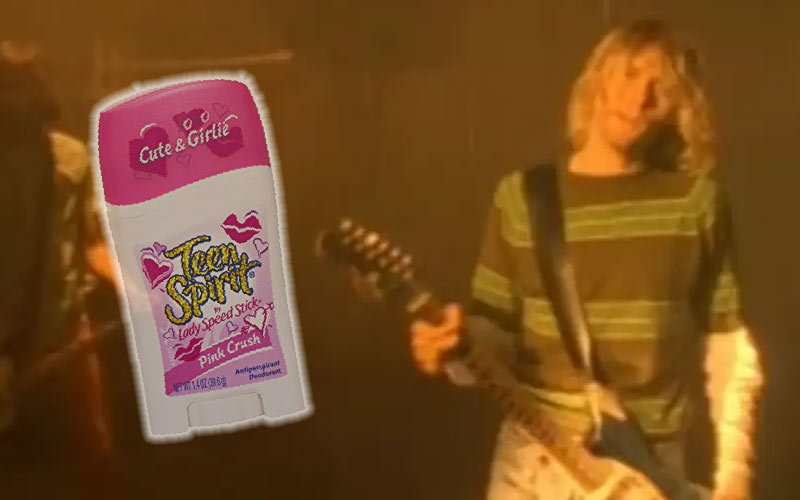 The band Nirvana, lead by Kurt Cobain, cemented themselves as one of the most influential bands of their generation with their biggest hit Smells Like Teen Spirit off of the album nevermind, but what exactly does teen spirit even smell like, and what is teen spirit, anyway? Let’s talk a quick look at the history of this song, what was going on with Kurt when he wrote it, its impact on popular culture, and what it’s even about…

First of all, what IS teen spirit?

Teen Spirit was also a brand of deodorant, whose sales increased drastically after the song got very popular. Using context clues like the “smells like” part of the title, it’s safe to assume that the title of this track was a reference to this popular brand of deodorant. But is that it?

Kurt Cobain had a difficult relationship with fame, shying away from the spotlight as much as you can when you’re leading one of the biggest bands in history right around the time that music videos and MTV are making a massive splash.

It was a perfect storm for a shy person to be uncomfortable, and Kurt would ultimately end up taking his own life. Whether it was due to unchecked mental illness amplified by drug addiction, trying to struggle with fame, a toxic relationship, or one of the more conspiratorial possibilities, the fact remains that Kurt Cobain made a huge impact in his short life.

There were journals and diaries that were released after his passing, and Courtney Love has spoken about the band and her husband plenty of times, but a lot of Nirvana still remains a mystery. This is amplified by the controversy surrounding Kurt’s suicide and the belief that it may not have been a suicide after all. There’s a lot to dog into with the overall Nirvana story.

A commentary on consumerism?

The title Smells like Teen Spirit seemed a little too poppy for a typical Nirvana song, and people took it to be kind of tongue in cheek, especially with the highschool setting in the video.

We can quit all of the speculations and take Kurt at his word that it’s literally just a song about deodorant, or we can try to dig in a bit deeper.

Why would such a commercially-uncomfortable band name a song after a popular product? It could be tongue in cheek, or he could be using Teen Spirit as a reference for consumerism and products being targeted at kids.

Kurt himself has said it was named after the deodorant, but that doesn’t mean its about deodorant. Kurt was known for his sense of humor and for trolling the media in interviews, kind of like Bob Dylan before him, so while we should certainly take his answers into consideration, we have to remember that there’s probably more to it.

With all of that out of the way, let’s assume Kurt was just taling about the deodorant. HEre’s a list of the scents that are currently available under the Teen Spirit brand:

There are also a number of discontinued scents, including: