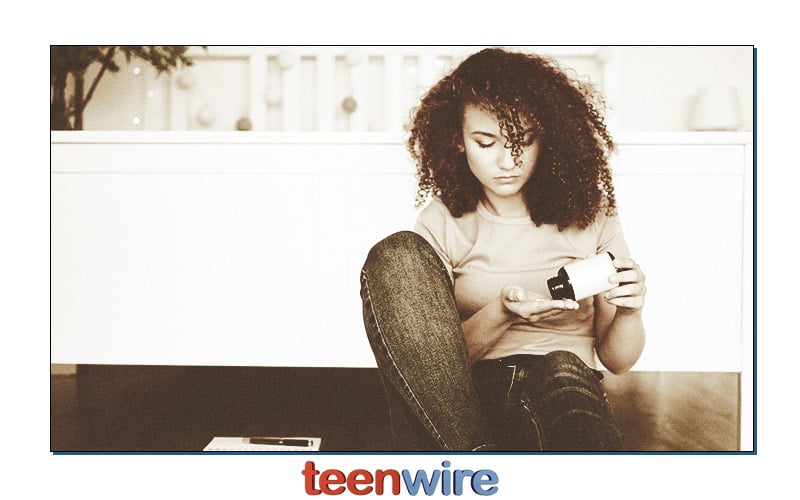 Addiction is a tricky topic because it can manifest itself in many different ways. One person might show clear signs of addiction, whereas another drug user might be able to hide it perfectly. This leads many parents and caregivers to wonder what are the warning signs that a teenager might be addicted to drugs?

With that in mind, and understanding that there isn’t a flawless way to identify this with perfect accuracy, there are still some warning signs that a teenager might be addicted to drugs.

Previously, we looked at the concerning question “Why do teens use drugs?“. That article is also a helpful resource for parents, caregivers, or friends who want to better understand why teenagers use drugs and why teenagers act out in general.

On the other hand, there are certain things that are fairly normal aspects of puberty and being a teenager that can also resemble some of the warning signs. For example, a teen might have a bigger appetite, which could look like “the munchies”.

A teen could also have mood swings, which could also be mistaken for a sign that they’re using drugs. The point is that many of these teen drug use warning signs can easily be mistaken for stuff that’s just part of growing up and being a teenager, so keep that in mind.

Here Are the Warning Signs That a Teenager Might be Addicted to Drugs:

Changes in any of the following areas could indicate that a teenager has been using drugs in some capacity. Treat these as red flags, but even a combination of these things doesn’t prove it one hundred percent (unless you’re finding paraphernalia, they fail a drug test, they confess, and so on).

This one is tricky because teens might sleep all day, or they might stay up and get just a little bit of sleep, for reasons that are entirely unrelated to drug use.

However, being able to stay up all night, or sleeping all day, are also potential signs or side-effects of using certain drugs.

A bad sleep schedule can also be a sign of depression in teens. Or can just be normal and their way of trying to adjust to their schedule.

As with everyone on this list, don’t look at it in a vacuum – it’s part of a bigger picture.

It feels really easy to judge whether a group of teenage friends are using drugs or not, and it can be tempting, but it’s really not that easy.

You could have a group of “stoners” who listen to classic rock and are completely straight-edge and have never smoked anything. You can also have a group of jocks and athletes who use hard drugs every weekend.

If a teen starts to hang out with a new group of friends around the same time as other red flags start going up, then this can be used as a piece of the puzzle, but it’s not the be all and end all.

Acting Out of Character

If a teen starts acting differently, this can be a sign of drug use. Extreme mood swings, or acting more withdrawn and distant, or seeming like they’re always in a great mood all of a sudden could point towards using drugs.

However, at the risk of sounding like a broken record, these things can all happen without drug use, too.

A change in behavior is similar to someone acting out of character. In either case, if a teen’s behavior is changing then this is something that’s worthy of paying attention to.

It could mean they’ve been using drugs, or it could mean they’re just going through a phase or a difficult time in their life. Either way, they might need some support and some love to help get them through it.

If you find odd pieces of paraphernalia, that could be a sign that they’re using drugs. Here are some things that might seem inconspicuous on their own, but could be used as accessories for drug use.

That’s just a small list of things that can be associated with various types of drugs that a teenager might be experimenting with.

It’s important to talk to your teenager. If they’re pulling away and seeking independence and control over their lives, that’s normal, but it can also lead to them making mistakes.

Teens are going to experiment in a variety of ways, they’re going to make mistakes, and it’s a parent or caregiver’s job to keep them on track as much as possible and to keep them away from making the types of mistakes that have severe consequences.

Keep some context, too. Finding the end of a joint or a pipe is a lot different than finding a burnt spoon and rolled up bills. The spoon is used to prepare heroin to be injected, and the bills are used for snorting a variety of substances.

In any case, you don’t want to have a teenager close themselves off and to become more careful to not be caught again, because things could get out of hand and they’ll be too afraid to talk to you about it, and they’ll get better at covering their tracks.

This is the balancing act that parents have been dealing with since the dawn of time. According to statistics, millions of teens report to using drugs each month in the United States, and that’s not including the ones who don’t report their usage when polls are done.

If you find warning signs that your teen is using drugs, don’t just immediately ground them or scream at them. Talk to them, see if those signs even point towards drug use, and find out why they’re using drugs in the first place. Get to the root of it, and work your way out from there.