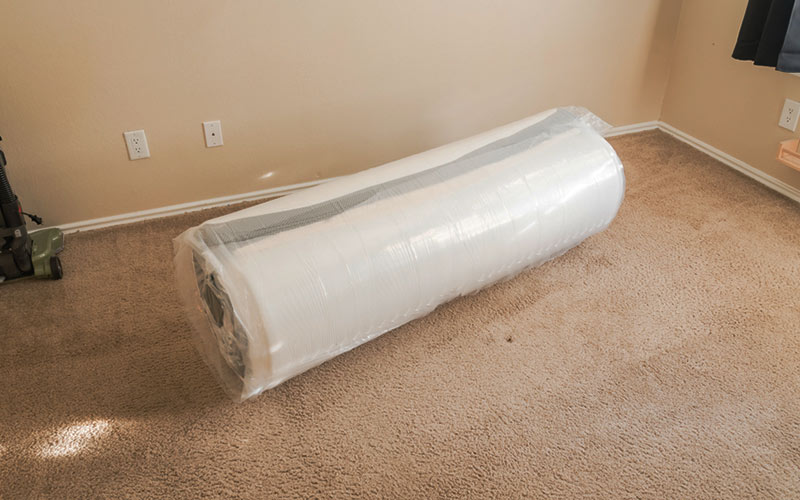 If you’re active online in any capacity, you’ve probably seen plenty of mentions of a mattress in a box – a (usually) foam mattress that gets flatted out to remove the air, packed into a relatively small box, and delivered to your door. You can also find these mattresses at stores like Wal-Mart and so on, but it’s the online ones that are typically in the premium-tier, and that all the fuss is about.

There are a few reasons that this type of mattress is great for a teenager’s room, here’s a quick rundown and then we’ll go over some of these points in greater detail:

Moving Time is Easier with a Mattress in a Box

Trying to move a full size, spring-coil mattress is pretty tricky. When a teen’s moving out from home, having a mattress that can be rolled up and stuffed into the trunk of a car can make moving way simpler.

Whether they’re going away to school and moving into a partially furnished dorm, or moving into an apartment with a few friends, having a moveable-mattress is an underrated benefit that will be much-appreciated at some point down the road.

The Benefits of the Online Mattress Craze

Most online mattress companies will let you try it out for a few months to make sure you can get used to the mattress. If you’re used to springs, then foam can take a little bit of adjusting, but it’s well worth it! Many people fall in love with it instantly, the second they lay down.

Also, you’re usually dealing with companies that manufacture their own mattresses or work closely with contracted factories, which means you aren’t paying a huge sales commission to a mattress store or a high-pressure salesperson which is always nice. You’re still paying a good chunk of money for any high-quality mattress in a box, but the value you’re getting still puts it far ahead of retail mattresses in most cases.

Now, some people are hesitant to buy a mattress without sleeping in it first, and that’s understandable – but even if you lay down on it for five minutes in a store, you haven’t really slept on it, and again the in-home trials make it risk-free.

This is good for teens who are a bit indecisive or just aren’t really sure what kind of sleeper they are yet.

Popular in Australia, Too

We recently heard from some friends that the mattress in a box thing was starting to get really popular over in Australia, where they’re from. We weren’t sure how good it would be in really hot weather, but they say with the right pair of sheets, it’s really not that bad, even on warmer days.

Canada, the United States, and many other countries all around the world have their own brands popping up into this growing category of mattress, and Australia is no exception.

A mattress should last a long time, especially since younger generations don’t have a ton of disposable income to buy a new one as often as we might like. If you’re looking for a new mattress for your teen, think about the future and something that will last them for many years, that’ll be easy to take with them, and that will be comfortable and supportive even when they’re living on their own.

Written By
Skyla Harris
Spread your love, share the article

We’re not here to bash gaming or say that videogames can’t be a fun, educational, and productive hobby, not to […]

Makeup and “girly things” can make a nice gift, some girls love that but even girls who love makeup have […]

If you have been recently booted from your parents’ insurance plan, you might be putting off receiving necessary dental care. […]

3 Affordable Vintage Watches for Teenagers on a Budget

There’s a certain point in life where your tastes start to become more unique and refined, but you aren’t working […]

When someone is living with diabetes, it can have a big impact on their overall life, obviously. That can be […]

What’s The Best Giftcard for Teens (Boys and Girls?)

When you aren’t sure exactly what to buy somebody, a gift card is a nice way to give them a […]