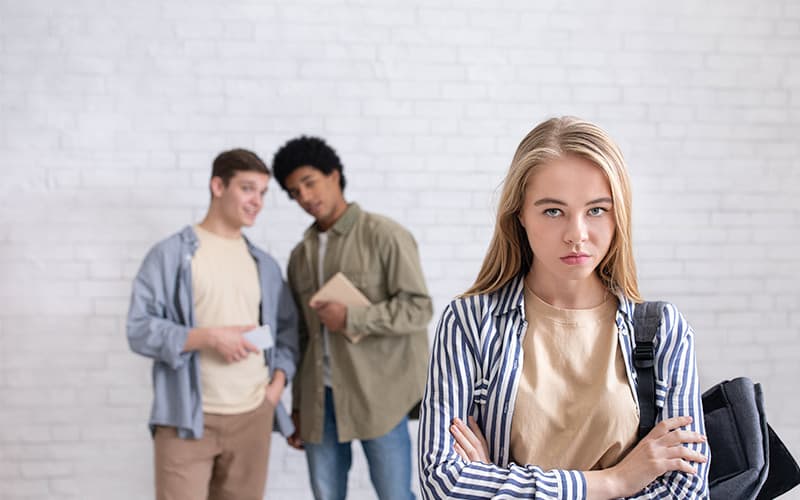 The teenage years are when many young people are still trying to find themselves and their identity. When you don’t have as strong of a sense of who you are, it can be much easier for others to pressure or influence you.

We often look at peer pressure as this ominous thing that people are doing on purpose, but usually it’s not that simple or malicious. The peer who is trying to pressure someone else might be just as lost and unsure of themselves, looking for validation by getting someone else to do what they’ve done.

Suffice to say, it’s complicated. Even more so when you realize that peer pressure isn’t always necessarily a bad thing. Someone’s peers can pressure them into making positive changes, or avoiding bad situations.

But generally speaking, the pressure to study harder, to adhere to a strong moral system, and to think about the future comes from teachers, parents, mentors, and other family members whereas the pressure to do things that feel good in the moment but aren’t always a wise idea? That tends to come more from peer pressure in teenagers and from other people the same age.

The Subtlety of Real Life Peer Pressure With Teens

When you’re watching a TV show or a movie, or even reading a book, peer pressure is often presented in a very straight forward way. In reality, in the real world, it often presents itself in a much more subtle way.

Dealing With Peer Pressure for Teens

When peer pressure is subtle it can feel harder to do anything about it.

Equipping teens with the ability to understand when they’re making decisions on their own, or when they’re doing it out of a perceived (or real) pressure from their teens can help them to navigate this tricky social situation that every teenager will encounter.

Learning one’s boundaries, and how to set and hold boundaries with their peers, is like a super power. This is something most people struggle with, even most adults, so it’s expecting a lot from a teenager.

Give Teens an Excuse

When peer pressure is more of an active thing, let your teen know that it’s okay for them to make you the “bad guy”, if they’re more comfortable saying “I can’t, if my parents find out, I’m in huge trouble. They’re going to lose it…” or whatever.

In the long run, it’s still important for them to learn to set their own boundaries and acknowledge that they’re uncomfortable with, but that’s a lot to ask of a teenager who is standing up and daring to go against the grain of a friend group, so this is a way to show them a bit of support.

A teenager who has a parent that stands up for themself and resists peer pressure is going to have a stronger foundation. Adults can be pressured, too. Whether it’s a pushy aunt who always tries to have their way, an aggressive salesperson on the phone or at the door, or a million other answers: parents can model behavior to their teenagers, including how to deal with peer pressure and peer influence in adolescence.

Teaching Teens to Walk Away

One of the hardest things that a teenager can do is to walk away from a peer pressure situation, but it’s also the best choice to make when people are up to go good and the teen knows they shouldn’t be a part of it.

Sometimes, a teen might be able to influence their friends to smarten up, but that’s not always going to be the case. There are a million and one examples of teens getting into trouble that someone would be better off just avoiding.

Teaching a teenager how to walk away from a bad situation, or a party that’s getting out of hand, or anything else will give them the tools to protect themselves and to know they have support in avoiding teen pressure.

Learning To Analyze The Situation

Humans are typically pretty bad at assessing risk in any given situation. The same goes for understanding consequences to different types of actions. Teens just aren’t always great at this, but teaching teenagers to analyze the pros and cons of doing something, what the risks are, if the risks are worth it, these are all important life skills.

You can’t sit inside a bubble-wrapped room for your entire life, but there are countless teens who have been in horrific car accidents who wish they could go back in time and drive a little bit slower or put their cellphone away.

As mentioned in the introduction, teenage peer pressure often goes unspoken. For those types of peer pressure, there isn’t always a concrete answer that you can give, but for more direct pressure, here are some teen peer pressure examples:

As you can see, not all of these are necessarily negative things, but some of them certainly are.

There’s also positive peer pressure like getting in with a motivated group of friends who want to attend good colleges, start businesses, work hard, have fun and wholesome experiences, encourage one another, and so on.

Obviously, those types of peer pressure are a lot more positive than the negative ones, but at the end of the day, it’s still important for a teenager to do things because they want to, and to learn to think for themselves instead of going with the crowd.

Teenager Peer Pressure Can Be Used for Good

As mentioned above, teenage peer pressure isn’t necessarily a bad thing in every single case, even if it’s important for teens to make their own decisions. If a teen is being influenced or pressured into doing good things, that they might even want to do but just need that little extra push, do you really want to step in and stop that?

How much do you value their independent thought, versus them arriving at positive outcomes and finding the motivation to get there?

In the case of negative peer pressure, it’s a lot easier to want to step in and teach them to avoid it. Peer pressure and being a teenager go hand in hand, but it’s good to help teens learn how to navigate this teenage peer pressure to live healthy, safe, fun, and rewarding lives.