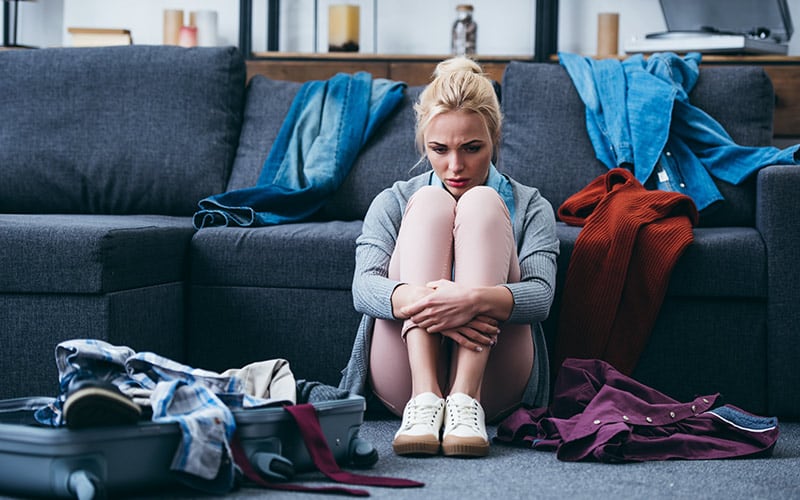 It can feel like the older you get and the more experiences you’ve had, the better you get at dealing with things and putting them in perspective. On that same note, that’s part of why teenage breakups can feel so devastating, especially when it’s someone’s first love but even other breakups.

In young love, it can feel like that person is just your entire world, and since you haven’t necessarily been on the planet enough to learn how much more there is to life, that relationship will be a disproportionately large part of your life at the time.

Teenage breakups can feel absolutely devastating at the time, but then many people will look back at them in hindsight and just laugh at how big of a deal it was at the time. Nonetheless, the pain you or someone in your life is feeling after a breakup is still real, and it’s valid, and it can be downright depressing. (See also: Signs of depression in teenagers.)

The 5 Stages of a Teenage Breakup

In an article for TeenVogue, Christina Najjar wrote about the 5 stages of teenage breakup. The article is called “5 Totally Normal Emotions That Everyone Goes Through When Trying to Survive a Breakup“.

How To Handle Your Own Teenage Breakup

If you’ve had a relationship end, whether you ended things or your ex did, or it was a mutual thing, or maybe just circumstances… none of these are easy, they can all be difficult for similar and for different reasons.

Here are some tips that you can consider to help you deal with your own teenage breakup, whether it was a long-term relationship or you found out very quickly that it wasn’t going to work. Both of these can be hurtful in a lot of different ways, for a lot of different reasons.

Give Yourself Time to Heal

Being single isn’t the end of the world. This can be a great opportunity to get to know yourself again, especially if you’ve been in a relationship for a while.

When you’re in your teenage years, and even in your 20’s and 30’s, you can change quite a bit over the course of a year or a few years, so if you’ve defined yourself by a teenage relationship, give yourself some time to get to know who you’ve become.

It can be tempting to rush into another relationship, especially if you’ve got people lining up now that you’re single. It’s not my place to tell you what to do, but the best way to start a new relationship is when you aren’t doing it to get over your previous one, and when you’ve had a bit of time to get comfortable with yourself again.

You’ll meet someone else, and you’ll probably look back someday and laugh about how bad you’re feeling right now – but hearing this doesn’t help you feel better in the meantime, does it?

Time helps to heal, meeting new people helps, and with all of this new perspective you’ll be back to feeling like yourself again in no time. But do give yourself that time, you need it!

Accept It: The Good and The Bad of Breaking Up as a Teenager

Don’t spend your time trying to win back your ex in some grand gesture or over the top show of love, remorse, or regret. If they broke up with you, you’ve got to accept it and hold them to that decision.

If you broke up with them, it’s normal to second guess yourself but remember that you broke up for a reason. You wanted something different, and that’s okay.

Regardless of who ended the relationship, it can be difficult to accept it, but it’s a huge step towards healing.

At the end of the day, it is what it is, and you’ll probably have many more breakups in your life. They’ll all hurt in different ways, but you’ll get over them, you’ll build yourself back up even better than before, and you’ll get one step closer to finding your ideal partner.

How To Help a Teenager Deal With a Breakup

Whether this is a friend of yours that’s devastated from a breakup, or your own child, or someone you care for – or whatever – take what you can from this advice and do your best.

Be There For Them

One of the toughest parts of a breakup is when you feel alone, because someone who used to take up so much of your time and your mind space is now gone and it can leave a void, so just being there for them and reminding them that you’re there for them can make a huge impact.

If they ask for advice, you can offer it but make sure you are giving the advice that’s best for them and not what *you* want for them. This can be difficult, so be very mindful and very thoughtful about it. We’ll touch in this a bit more in-depth in a later point on this list, but basically, if you really liked or disliked their ex, that could influence your advice but it’s not your life, you’re not the one dating that person.

Of course, this point will change if the ex is abusive, or otherwise a bad partner that they need to get away from. But if you just don’t like them on a personal level, it can be a bit manipulative if you give them advice to steer them towards what you want for them, rather than helping them discover what they want for themselves.

If you’re a bit older, and you know a teenager who is losing their mind because their 3 month relationship ended, it could be your natural instinct to just roll your eyes and tell them to grow up and get over it…

But it’s not always that easy. You have to try to think about how you felt at that age, and if this isn’t something that would have bothered you, it can be hard to relate with what they’re going through.

There’s a balance between validating their feelings and letting them know that what they’re feeling is okay, while also not feeding into the idea that this is the worst thing that will ever happen to them.

It’s not your job to rescue a teenager from how they are feeling. This is part of growing up, and learning to deal with this now is better than later on.

Give Them Room to Sit With Their Feelings

As a continuation of validating their feelings, you can also give them room to sit in their feelings by realizing that they may not be at 100% for a little while. Keeping this in mind when you interact with them, even if they seem fine at the time, is a really good way to avoid pressing on the injury.

Imagine you have a sore arm, and you’re able to more or less still get through your day, and if someone were to grab you by the arm and squeeze, it would hurt a lot more than usual.

In this case, if you start to pile on other things or nag them over unimportant things or just generally needle them with stuff, even if it’s unrelated to the breakup, that can make things a lot harder.

There’s a reasonable amount of time to let them sit with their feelings and slowly get over it, where you can act with a bit more compassion and understanding, but there’s also a point where they need to get on with their lives and a teenage breakup isn’t an excuse to avoid normal life stuff for the rest of time, either.

If the teenager in your life is the person who ended the relationship, it’s not your place to encourage them to get back together with their ex. That’s weird. Even if you think their ex was good for them, or you liked the ex, or whatever – you have to take yourself out of it and recognize that it ended for a reason, and you don’t know the full story, or how things were in private, or everything that happened.

Sowing seeds in doubt, whether it’s your friend or your kid or whatever, is not good and can teach some pretty toxic lessons that could influence how they interact with relationships for the rest of their lives.

On that same note, if you hated their partner, this isn’t the best time to take a victory lap or drop any “i told you so’s”. you know? Just be there for them.

How to Help Your Teenage Daughter With a Broken Heart

This section, and the next one, deal with specific genders and how to help them through a break up. I’m including these to help people find this article, but I don’t believe that the advice is necessarily different based on whether you have a son or a daughter.

If your teenager daughter is dealing with a broken heart, the rest of the advice on this page still applies. Be there for her, let her know that she’ll meet other people in her life, give her space to sit in her feelings but also make sure she knows you’re there for her.

How Do I Help my Teenage Son Through a Breakup?

Teenage breakups can be tough on everyone, and people deal with them in different ways. Much like the previous section above, all of the advice on this page also applies to teenage sons.

Your teenage son might not be as in-touch with his feelings, or might not be as good at expressing them compared to the average teenage girl, so with a son it can be a bit harder to get them to open up and talk about it (if we’re just looking at averages or how culture impacts things), but it’s still important to let him know you’re there for him, give him room to heal.

How to get over a breakup for teenage guys is the same as it is for girls, but they may be socialized a bit differently.

Hopefully this advice has been helpful! As a teen, a breakup can feel like your whole world is falling apart but you’ll soon realize – as time passes – that one relationship isn’t everything, and things end for good reasons, and there are plenty more fish in the sea. Whichever cliche gets through, just remember that the pain you’re feeling is normal and you don’t have to diminish it or trivialize it. If people around you try to act like it’s not a big deal, you can bet they’ve had their share of heartbreak too, and it felt like a big deal when it happened.

Teenage breakups aren’t easy, but you’ll survive, you’ll learn a lot about yourself, and you’ll grow as a person and that’s a really good thing, even if it hurts right now and even if it really sucks.