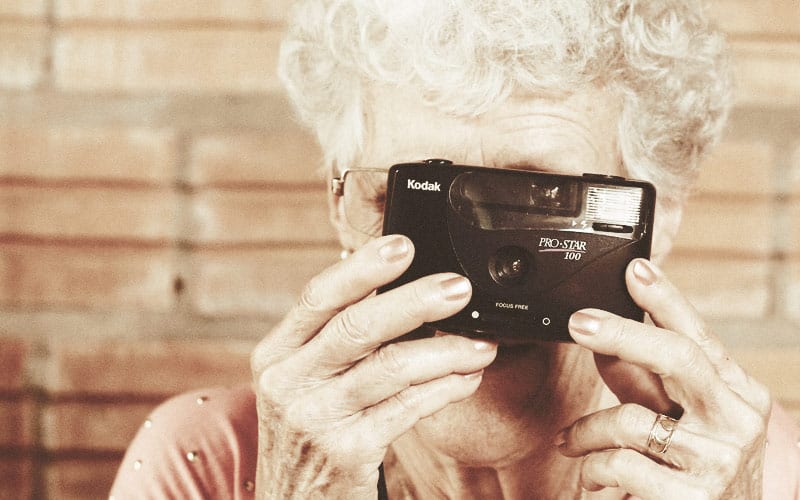 There’s this classic stereotype of a sweet grandma whose wise and thoughtful, who raised your mom or dad and gained a lot of experience, learned from her mistakes, and puts that towards being an amazing grandmother…

But you have to remember that grandparents are just people who are older than your parents. They didn’t pass any tests or certifications to become your grandparent, and as such, a teen who turns into an adult who turns into a grandparent isn’t necessarily a better, sweeter, wiser, or kinder person if they haven’t lived an introspective live.

Someone who has mental illness, narcissism, displays signs of a controlling grandma, or just a bad personality can become a grandparent just as easily as a sweet old lady who spends her days baking cookies and missing her grandchildren.

If you’re unlucky and you have a mean grandma who doesn’t treat you well, it’s unfortunate but all you can really do is learn how to navigate it and how to avoid being hurt or taking it personally when she lashes out on you.

If your grandma makes you feel scared, or manipulates your emotions, and you feel she’s controlling, please take some time to read this article and absorb the information while thinking about ways to apply it to your own life and situation.

10 Signs of a Controlling Grandma

I’m not saying that you should cut all ties if she does one or two of these things, but you might want to learn to keep your guard up a bit in order to protect yourself, and just to remind yourself that these are her problems and insecurities, NOT yours.

10. She Has Strong Manipulative Tendencies

If your grandma uses tactics like gaslighting and guilt-tripping to get what she wants, she’s definitely controlling. Such a person would want everything to go her way or else hell will be let loose.

She’ll make sure to play the victim whenever there’s a little disagreement and evade responsibility for her actions. If she constantly plays the blame game or uses people’s weaknesses against them, it’s a sign that she’s controlling.

9. She Overreacts To The Slightest Things

A controlling grandmother would explode in anger at the slightest things. She’ll demand total obedience to her rules whether they’re sensible or not. She gives no room for contradictions and doesn’t entertain anyone’s opinion.

Some grandmothers go as far as threatening to cut you or your children out of her life (or her will). When you have a controlling grandma that’s also rich, it becomes worse because she’ll keep threatening to stop helping the family financially.

Such a person would want everyone to be her puppet.

8. She Doesn’t Respect Your Decisions

She’s someone who’ll ignore your instructions when she babysits no matter how many times you tell her. And whenever you try to confront her about it, she’ll dismiss it and insist that it’s insignificant or unnecessary.

One of the signs of toxic grandparents is that they tend to be narcissistic. A controlling grandma would be very selfish and concerned about herself only.

Whenever things don’t work out the way she wants, she’ll get mad. She would also refuse to do anything that wouldn’t benefit her.

6. She Chooses Favorites Among Her Grandchildren

A controlling grandmother will most likely choose one child to be her favorite. Then she’ll treat the others like they’re trash. This singular act might cause divisions amongst her grandchildren over time.

A grandma that does this probably did the same thing with her own children.

5. She Manipulates Her Grandchildren To Gain Their Loyalty

A controlling grandmother would choose to groom her grandchildren through manipulative means. She’ll make them love her by excessively spoiling them, letting them defy their parents rules and telling them that they’re safe with her.

4. She Never Owns Up To Anything

One of the major signs of a controlling grandma is that she never owns up to anything. No matter what you say or do, she’ll never take responsibility or apologize for her actions.

She’ll repeatedly cross boundaries and disregard your choices. Whenever she commits an offense, she’ll deny it and turn the tables on you instead.

3. She Causes Problems During Holidays And Special Events

Family events and holidays are supposed to be full of  happy moments and memorable. A controlling grandma would make you dread any family event or holidays.

She’ll ensure that there’s a lot of unnecessary drama and fights at every family get-together.

A controlling grandma for example would do anything she wants for her grandchildren regardless of what the parents say.

1. She Tells Lies About Everything

A controlling grandmother would lie to get out of any situation or to get what she wants. It’s even worse because she’ll make you mad by lying about unreasonable things.

Whenever you point out her lies, she’ll resort to manipulative behaviors like calling you names and playing the victim. Most times their intentions are to evade accountability and responsibility for their wrongdoings.

How To Deal With A Controlling Grandma

Dealing with a controlling grandmother involves learning how to protect yourself and your children from her.

Here are some tips on how to do that:

Controlling grandmothers typical defy boundaries and limits. It’s something they always do. Now you can only deal with this by setting more boundaries each time they defy one.

If they still continue crossing the boundaries you’ve set, there’s something else you can do. Let them know that there’ll be consequences for crossing boundaries.

For example, if you tell her not to give your baby chocolates while she’s babysitting the child and she does it, tell her you won’t let her babysit anymore. Grandmas may be a lot to handle but most of them love their grand babies and will surely want to babysit them.

Also, start giving conditions for spending time around her. Setting boundaries can be tough if it’s not something you’ve done before, but it’s important. Set the boundary, and then if she ignores it, you have to enforce it. You MUST enforce it.

Maintain A Safe Distance From Her Emotionally

Most controlling grandmothers love it when they get you riled up. They love arguments, shouting and unnecessary quarrels. Trust me, they’re excellent at getting into people’s heads.

There’s a coping strategy for this and it involves ignoring them or acting like they aren’t there. Once she starts nagging, don’t let her get a reaction from you. If you can leave that place, it’ll be best to walk away.

Keep quiet regardless of how much you’re hurt by what she’s saying. If you talk back, it’ll only hurt you more. Instead, learn to emotionally “play dead” when she’s causing drama. That way, she’ll get tired and leave you alone.

Don’t react to little things anymore. Be selective about the things you’ll react to or complain about. Constantly bickering with her would do more harm than good.

Truth be told, some grandmas are only toxic when they’re grandparenting while others are naturally toxic people. Protecting grandchildren from narcissistic grandmothers is very important so instead of reacting to the grandma, keep your children safe from her  instead.

Do any of these signs of a controlling grandma hit close to home? It’s not easy to accept, sometimes, that your grandma isn’t the perfect person you may have seen her as when you were younger. Do your best to focus on her positive qualities, and make sure she isn’t in a position to hurt you (or your kids), and try to make positive memories as much as you can.