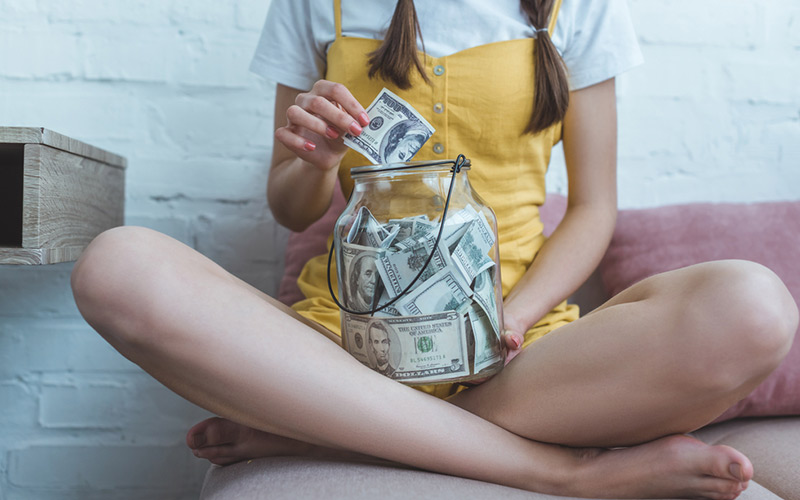 Many teenagers spend their money as quickly as they earn it. Whether it’s allowance, or small paychecks from after-school part-time jobs, after a weekend out there isn’t always much leftover for building a nest egg.

If you can learn these lessons early on, this is a great time in life to put together some savings. Sure, the checks are usually smaller, but so are your expenses and obligations.

Compound interest is an incredibly powerful tool. When you save or invest money and earn interest or dividends, you’ll have a greater sum of money. So, the next time an interest or dividend payment comes around, you’ll earn even more in interest, therefor your next interest payment will be even higher, and so on and so on.

What makes this so much more incredibly powerful is being able to start at a young age, even if it’s not a lot of money. Helping kids to invest is one of the best things parents can do
to set their kids up for financial success.

But we’re just getting started because now you’re starting the next decade with $19.67 instead of $10, so you’ll earn twice as much interest and it will compound even faster. If we take that same $10 and compound it for 20 years, it’s now worth $38.70, almost 4x as much as you started with.

Now, imagine starting off with more than $10, and continuing to contribute from your paycheck.

If you’ve ever thought about having money to retire, or just being rich later in life, here’s how easy it can be, even without ever earning a huge income.

Wealthy people know how to make the banks and financial tools work for them, but even people with less money like teenagers can make some serious moves at a young age.

If you finished reading about compound interest but you’re thinking, “That’s all well and good but where am I supposed to get $1000, and then $100 every month to add to the pile?”

In his book The Wealthy Barber, widely considered to be one of the bibles of personal finance, David Chilton advocates for getting in the habit of putting away 10% from each paycheck you earn, right off the top. Before you do anything else with it, take 10% and put that money into a different account and leave it alone.

If you’re in the habit of spending all of your money before your next paycheck rolls around, you can still save – just put the money away first, instead of trying to have anything leftover. You’ll be able to make it work, you won’t miss that 10% in most cases, and then no matter how your spending habits are until the next payday, you’ll always have something to show for it.

Throughout a lifetime, the 10% rule combined with the power of compounding interest allows just about anybody to create significant wealth for themselves.

1. Keeping Tabs on your Cash

If you’re ever afraid to open up your credit card statement because you don’t know exactly where your finances are at, or if you feel anxious waiting for your debit card transactions to process at the store, you need to be more proactive in monitoring your money, budgeting, and planning.

YNAB is a good desktop application (available on Steam) for keeping track of your personal finance. Mint is one of the most popular ones, but it has trouble integrating with certain banks which gives you an incomplete view of your finances and kind of defeats the purpose. Personal Capital is worth checking out as an alternative, too (here’s a Personal Capital review that covers it in-depth.)

You can also just use a spreadsheet, a note-taking app on your phone, or a good old fashioned notepad. At it’s most simple, you want to track the money that comes in and the money that leaves. Apps can do this automatically, and a lot more, but something really simple is usually good enough for teenagers.