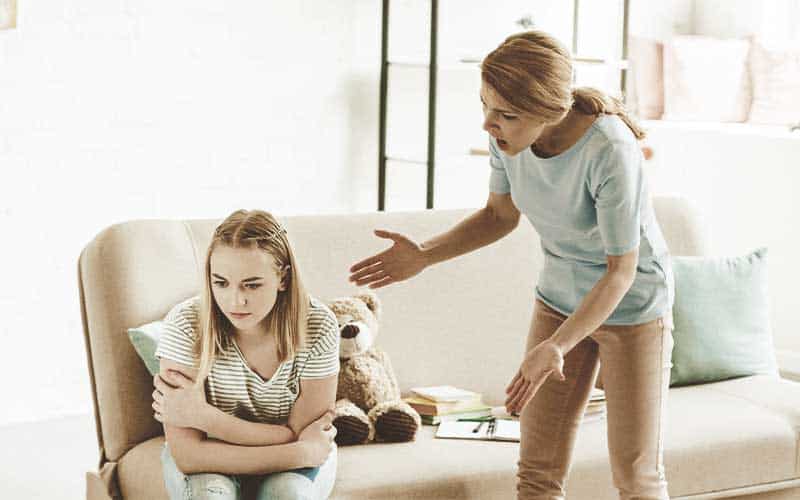 When a mom learns she’s having a daughter, it’s a magical moment. It’s not always the case that moms hope for girls and dads hope for boys, but as a mom you can sometimes feel like it gives you a leg-up, like you’ll have an inherent understanding of daughter.

But before you know it, the teenager years roll around and your sweet little girl is saying absolutely horrible things to you. Even if it’s in the heat of an argument or a tense moment, it still stings and hurts in a way that nobody else could hurt you.

A mom’s instinct is often to look at how the daughter relates to her father. Maybe the daughter is just going through her difficult teen years, and has issues with authority and trying to carve out her own identity, which is a big part of why teens rebel…

But if she’s getting along great with dad and seems to love him so much more, where does that leave moms?

Here’s some helpful information for moms who are having a difficult time with their teenager daughters.

Understanding What’s Normal and What’s Not

You won’t believe how many moms type this exact phrase into the internet each and every month. The phrase is “my teenager daughter hates me but loves her dad.”

It’s such a common issue and that’s the first bit of solace you can take as a mother.

It’s not uncommon for teen girls to have a different relationship with their fathers than with their moms.

There are all sorts of reasons for this and trends that can be observed across families. It’s not always the case that a teen daughter will get along with her father better, and the personalities and parenting styles of each parent can play into it, too.

Of course, if things are getting out of hand, there’s a point where it’s not really normal anymore.

It’s easy to take a fairly common and arguably normal part of growing up, like a rift between a teen and her mother, but just because something is normal or common, that doesn’t mean you shouldn’t take steps to strengthen your relationship with your daughter.

Remember back in the day when you were so excited to be able to guide your daughter through life’s challenged, helping her avoid the mistakes you made? Sometimes, this foresight and desire to protect her can actually come off as overbearing.

She might feel closer to her father because he’s not offering guidance or advice based on the same types of personal experience as you, the mother. To your daughter, it can feel like you see her as a clone of yourself, whereas her father might offer advice that feels a bit credible if she’s taking mom’s advice as bias or overbearing or out of touch.

The WORST Thing a Mother Can Do…

If you want your daughter to feel comfortable coming to you with her problems, then the absolute worst thing you can do is to freak out at her or punish her for something she talks to you about.

That’s a sure-fire way to make sure she never wants to open up to you again, and it can only take one time and the door’s closed unless you do some serious and intentional work to regain her trust with these types of things.

5 Things You Can Do When Your Teenage Daughter Hates You, but Loves Her Dad

Main Takeaway: Your daughter sees you as the authority figure, which means you’re going to get the brunt of her rebellion taken out against you. If the dad tends to go easier or is more lenient, it might seem like she loves him more, but sometimes you’ve got to just take the heat for a few years for continuing guiding her towards what’s best for her.

At the end of the day, this is usually a phase that most moms with teen daughters go through. If dad’s in the picture, it’s not rare for him to bond a bit more with the daughter during these years, and it can feel like she loves her dad but hates her mom, and that’s a bad feeling…

But let’s face it, parents have to feel things that feel bad, sometimes. It’s part of being a parent.

If it feels unbearable, or you just can’t relate to her, or the smallest things are always turning in screaming and shouting matches, it doesn’t hurt to look inward and think about how you, yourself, might be contributing to these situations. Even if it’s a common, normal thing, it’s still possible for you to take steps to make it a bit better and easier (or worse, if you’re not mindful).

As we often say, a parent who is taking the time to research and read about what they’re going through with their teenager is already in the upper echelon as far as parenting teenagers is concerned, so even if it feels like your teen daughter hates you but loves her dad, you’re doing your best and she’ll come around in a few years.

Until then, do your best to stick it out, be there for her, remind her she’s loved, and also give her the space to grow and make mistakes and become a mature, kind, adult.