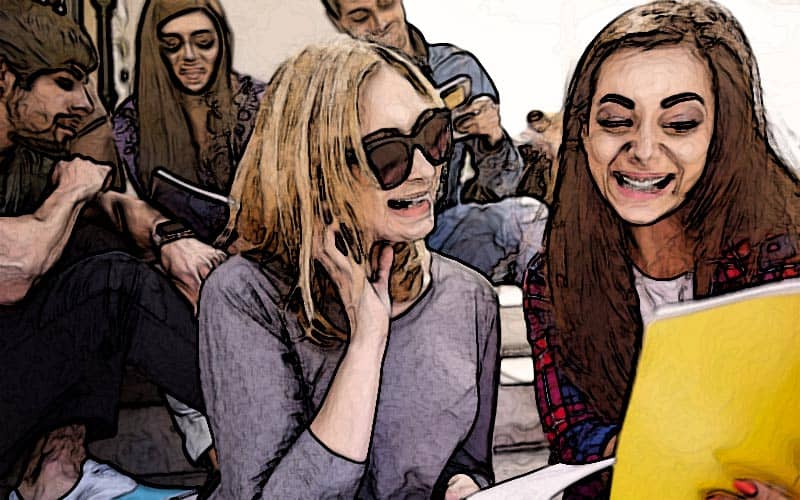 Teenagers love to learn and learning games for teenagers help make that fun. Let’s dispel of this myth, once and for all, that teens don’t want to learn new things.

When a teenager is interested in a topic, they’ll seek out new knowledge non-stop, the trick is that it has to be something they’re interested in.

You can’t expect someone to become obsessed in learning all about a topic or field of study that doesn’t interest them at all, right?

That’s why teenagers will read articles and social media posts, for example, about their favorite musicians or streamers all day long, but have trouble cracking open their math textbook until the very last minute. In both examples, they are learning new things, the difference is that some topics are a lot more interesting than math homework.

This doesn’t mean that math, or science, or English, or art, or any other subjects can’t be made fun and educational at the same time, it just means that it’ll often take another step to make these topics interesting for someone who isn’t inherently drawn to them.

Classrooms offer a perfect environment to explore different learning games for teens, since when you’re in a classroom, the game doesn’t have to try to compete with Fortnite or Call of Duty to get a teen’s attention, it just has to be more engaging and fun than sitting through a regular lesson.

Kind of like when you have a pet and you need to give them medicine, you can mix it in with a treat – that’s how we’re able to engage teenagers in some very educational games without them even necessarily realizing how much they’re learning, since the games themselves are fun.

Here are a few classroom games for teenagers, along with a brief rundown of the rules and how to play these classroom learning games.

You should feel free to adapt the rules in any way you see fit, these are just meant to give you a starting point.

You know your group of teens best, and if any of these games aren’t a perfect fit “right out of the box”, just adapt them (and let us know how it goes!)

This is a group game that you can play at home or in the classroom. All you really need is someone’s Spotify account, or some other collection of music or playlist, and some pens and paper.

You’ll play songs, one by one, as each player writes down the name of the song and the artist. After you’re out of songs, go through the playlist again quickly and reveal the answers. Everyone can keep track of their own scores, and whoever guessed the most correct is the winner.

You can pick songs that were popular when everyone was a younger kid, or newer songs, or whatever you want! You can also decide whether you want to play the first 10 seconds of each song, the first minute of each song, until the first chorus, or include the choruses if you want to make the game a little easier.

This is a fun game for groups of teenagers in a classroom. Start by dividing the class into at least two groups.

Write the letters A through Z on the chalkboard, once for each group, with room next to each letter to write a word.

One member from each group, at a time, will go up to the board and write a word on the board, next to a letter that start with that word.

Each time you play, you will choose a theme or topic that has a large enough lexicon. For example, the theme of the game could be music, or sports, or celebrities, or anything else.

It can be difficult or nearly impossible to come up with words for certain letters in certain topics, in this case you can offer a number of “free” spaces where the team can skip that particular letter. Or, instead of letting them use a certain amount of free spaces, you can allow the team to copy another team’s answer for that letter, effectively neutralizing the two teams from getting an advantage on that point.

When referring to interactive games for teenagers, this term is typically used to describe games that are played using some form of electronic device, or games where the players interact in different ways. This could be anything from a trivia game, a more traditional type of video game, or even a board or card game that’s played on the computer. Here are some of the best ones for classrooms…

Running Dictation is one of the best ESL games for teenagers according to ESLSpeaking.org, who go on to describe it as follows: “It’s fun, challenging, covers all 4-skills, and can really energize even the quietest, most apathetic of classes. It also makes an excellent review activity if there is a specific grammar point or vocabulary words that you want the students to see one more time.”

Dunning Dictation is a 4-skills game, which means that it uses reading, writing, speaking, and listening skills to play.

You can adapt this ESL game for teens for your own space and group, which is how I’ve adapted it from the rules provided by ESLSpeaking.org.

I played this game with 6 people. I had two teams, with three people on each team.

The 1st member of each team plays the role of the runner, the second player is the reader, and the third member on each team is the writer. We also tried this game with three teams of two people per team, where each team only had a runner and a writer. My group enjoyed it more with three members per team, but again, I highly encourage you to adapt this game for yourself.

Before you can play, you’ll need a few passages of text. You can take captions from a celebrity’s tweet, you could use a section from a book, you could use famous quotes, you could even jokes riddles for teens if you want to add another level to things.

The reader/runner will read the passage of text that’s been selected beforehand, then travel to the writer, and whisper it to them. If both teams are using the same text, whispering will ensure that the other team doesn’t overhear you and save themselves a trip.

For an easier game, they can read one line at a time, and for more advanced students they could try to memorize a larger portion of the text.

The runner can make multiple trips back and forth, but ultimately it’s a race between each team to see who can complete every passage of text first.

Apples to Apples is a card game based around word-association. There are “green apple” cards and “red apple” cards. Despite the fact that it’s based around matching words together, this is more of a social game that requires you to think about the people you’re playing with, what their sense of humors are, and the types of responses that they’ll find most entertaining.

This game is about making humorous comparisons by matching words together, it’s the wholesome version of the also-popular game “Cards Against Humanity”, which is a lot edgier and not appropriate for a class-room setting, but still a favorite among teens. Cards Against Humanity draws on the same skill set as Apples to Apples, and could be a great alternative for older teenagers who enjoy crude humor.

You can play a simple, just for fun version of this game with a couple of people, or with a much larger group. The sweet spot is probably to have around 3-4 players, so that everyone has a chance to get their cards picked here and there, and so that you can use some strategy to think about which types of cards will appeal to which players. Apples to Apples isn’t the first thing that comes to mind when you’re thinking of educational games for teens, but it’s a very fun interactive game for teenagers that people will actually want to play.

Some of these games for high school students aren’t necessarily the most fun, but they’re very educational. Apples to Apples isn’t as education as some games, but it’s so fun that it still strikes a worthwhile balance, it’s okay for things to lean more towards the fun side sometimes, especially if it’s a game like this that still offers some useful learning elements to it.

Escape Room in a Box belongs to the genre of escape room board games, a fun way to enjoy an escape room at home or in the classroom. It’s a great activity for smaller groups, and some escape room games also work with a single player.

There are a few different escape rooms in a box that you can choose from, based around different themes. The puzzles are similar to what you would find at an actual escape room, including math puzzles, word puzzles, and a variety of different challenges that make you think outside of the box to move forward and to ultimately escape the room.

If you’ve done a lot of escape rooms in person, you’ll still have a lot of fun with a game like this because it borrows some of the things that make escape rooms so fun and special, but it also incorporates some new elements that don’t necessarily work well in a traditional escape room, but that can be a lot of fun at an in-home, sitting-down type of situation.

What Are Your Favorite Learning Games for Teenagers?

Have you tried any of the games on this list, or are there other learning games that you’ve had a lot of fun or success playing? Educational games should be fun, that’s what makes them games, right? Otherwise, you might as well just crack a textbook. Games are a great way to reinforce learning and to help with things like repetition and memorization, along with countless other useful and valuable skills.

If you know any fantastic learning games for teenagers, please feel free to do a quick write-up about why you like it, what makes it noteworthy, and who you’d recommend it for and we’ll add that to this list as we’ve done with previous entries!