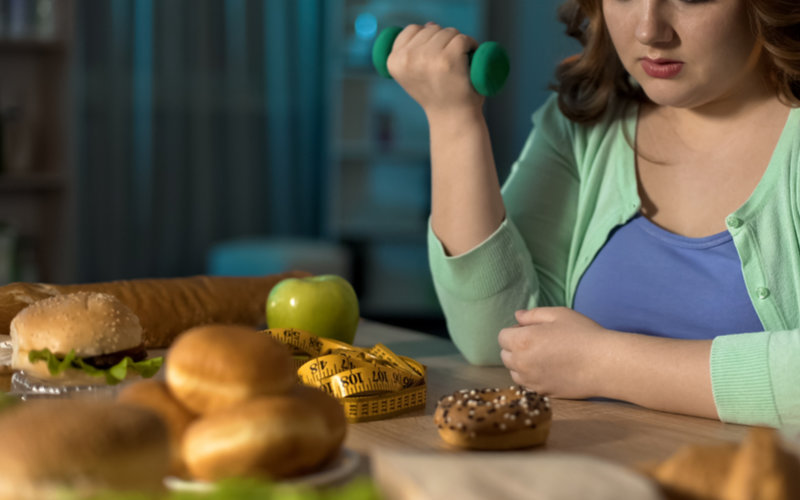 The title of this post is a question that I’ve noticed being asked more and more frequently, and I want to address it.

If you want to lose 10 pounds in a week, the first step is to ask yourself why.

There are a lot of reasons a teenager might want to lose 10 pounds in a week. Ideally, everyone will be okay with their bodies and not worry too much about it, but that’s not the world we’re in, and there’s all sorts of pressure coming at teens from all angles to look a certain way.

Feeling happy with how you look and feeling confident is the single most important thing you can do to change your appearance in a short amount of time. It’s not as easy as just flicking a switch, obviously, but it’s the goal one should work towards.

The Real Secret to Weight Loss for Teens

Ok, hopefully I’ve kept you here long enough that you don’t click away as soon as I say that there’s no safe, healthy, or realistic way to lose that much weight in such little time. Dehydrating yourself is never a good idea, you’ll end up passing out or causing serious harm to your organs (The harm may not present itself immediately, that’s the scary part! You could feel okay but be doing longer-term damage to your body.) Also, as soon as you have a few cups of water, you’ll gain all of that water weight right back. It’s just a bad idea.

DO NOT BUY ANYTHING! Don’t buy any courses, any sketchy pills being sold online, not even any weight loss junk sold at GNC or other big stores. You don’t need it! You need to move more, and eat less to lose excess weight. That’s it.

The best ways to lose weight are to slightly reduce your daily caloric intake, to drink a lot of water (But keep it around 2L unless it’s a super hot day and you’re running around outside, etc. It’s possible to drink too much water.)

Professional fighters like boxers, wrestlers, or mixed martial artists are known for losing insane amounts of weight super quick, and it literally kills some of them.

If you try to drop 10 pounds in 7 days out of nowhere by starving yourself, dehydrating yourself, and so on… you won’t only bounce back even heavier in some cases, but you’ll definitely gain it all back really quickly, maybe even before the week is up. Sometimes, you’ll end up weighing more because you haven’t addressed the root of the issue that has caused you to overeat or live sedentary in the first place.

Having said that, when you first start working out and eating better – if you usually don’t do a great job of either of these things – you absolutely can notice a difference, you can shed a few pounds in a week. You can lose several pounds in a week, in a healthy way. Start working out today. Go for a long walk, hit up a treadmill, whatever. Eat fruits, vegetables, healthy sources of protein, etc.

You CAN Lose Weight in the First Week

It usually takes a couple of days for the lifestyle changes to “kick in”, sometimes our bodies notice us eating a bit less or moving more and they think “I need to conserve a bit!” but that passes, and if you keep up the good habits, you definitely can drop more than a pound or two in a week, depending on where you’re starting.

If you’re like 5-10 pounds overweight, it’s more of a mental thing. You need to understand that you look a lot better than you think you do. This doesn’t just apply to smaller people tho, everybody looks a lot better than they think they do.

Realize you look better than you think you do. The way other people see your body isn’t the same way you see it. You’re much more critical of yourself than others are, and anyone else who has an opinion about how you look can take a long walk off a short pier, ok?

If you don’t eat very healthy, or you tend to over-eat, work on that. A little bit at a time. Day 1, eat 200 calories less than you normally would. Day 2, maybe 300 less and stick to that. These are just random numbers, you’ll have to see what your typical caloric intake is. Count it. Count every single calorie you eat for a day, then you’ll know what your baseline is, and you’ll know how much to cut back.

Most people offering you advice about weight loss on the internet are trying to sell you something. Whether it’s pills, or a course, or a membership, or whatever. The truth is you don’t need that. Most of them ultimately come down to “move more, eat less.”

Drinking a lot of water can seem counterproductive cos you’ll weigh more after drinking it, but don’t worry – it passes through soon.

I’m having a hard time coming up with a valid reason to try to lose 10 pounds in a week for teenagers. It’s probably anxiety talking, you’ve waited your whole life to take action and now there’s only a week left so you want to cram at the last second. That’s not how it works. But you still can make a change, make a difference.

Exercising makes you feel better, eating healthier makes you feel better, so even though you won’t drop 10 pounds in the first week, you’ll still feel more confident and you’ll have more energy and you’ll generally be an upgraded version of yourself. You may only lose a pound or two, maybe three or four, but you’ll have done it the right way, a healthy way. Purging and starving yourself to lose weight quickly will hamper your mood, is dangerous, and will probably leave you grumpy and lead to putting all the weight back on soon anyways.

Exercising and doing it right helps turn you into the best version of yourself, and whatever your reason for wanting to lose a bit of weight is, you’ll accomplish the same goals by having a better perspective, being more confident in your body, and if you really need an extra little boost – buy a new shirt or something!