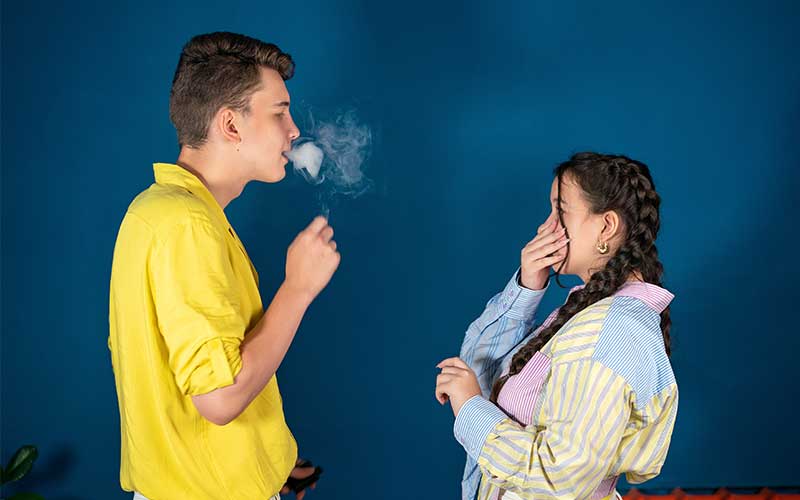 The rates of teenage smoking have been declining, and tend to always trend downward, which is a good sign in and of itself. However, there are still many teens who are avid smokers, in fact some teenagers may smoke a pack or two in a single day. Are you curious about the effects of teenage smoking? Let’s go over them.

You’ll probably read through this list and wonder: why do teens smoke? It’s a good question, because most people are very aware of the negative effects of smoking. When you’re a teen, your 30’s, 40’s, 50’s and beyond all feel like they might as well be a million years away, so thinking about the consequences that may arrive in decades doesn’t always cross a young mind.

Combine that with the fact that cigarettes and smoking can be very addictive. So, young people will start smoking, become addicted, and by the time they start to feel the negative impacts on their body, they’re addicted.

The best way to quit smoking is to just never start smoking in the first place, but if it’s too late for that, then learning about the horrifying effects of teenage smoking, and frankly smoking at any age, can help convince some people that they should think about quitting.

Our goal here isn’t, however, to push you towards quitting or even necessarily to convince you to never try smoking in the first place. The goal here is simply to pass along some information, in a non-judgemental way, that will give you an idea of what to expect if you smoke as a teenager.

How does smoking effect the teenage body?

Some are more severe than others, for example the first item on this list deals with hygiene and the final one deals with a decrease in life expectancy. Not quite on par, but the truth is that you’ll experience multiple negative effects of smoking when you’re a teenage smoker.

Here’s why teenagers should not smoke, among other reasons:

Smoking will make your breath and your clothing smell bad. Even smokers tend to dislike the smell of smoke, but smokers can’t always smell their own smokey smell, so you can be walking around stinking and not even realizing it.

Smoking will make your teeth yellow, it’ll make you smell bad, it’ll make your hands stink, and it can also limit you when it’s time to start thinking about entering the dating world. While some people may smoke and want to be with a smoker, a lot of non-smokers will simply choose not to date someone who smokes at all.

Smoking can make you feel more short of breath and can have a negative impact on your stamina. If you’re into sports and athletics, this can have a serious impact on your ability to compete. Even if you know a kid who smokes and runs track amazingly well, that’s just an anecdote, and who knows how much faster or longer they could run if they aren’t smoking?

It’s important to avoid falling into the trap of ignoring the very real, well-documented and studied negative effects of smoking on teens just because you know someone who might be an outlier or a high-performer.

This can manifest itself in many ways, and has been studied well over the years as one of the many reasons to avoid smoking in your younger years.

The problem here is that many teens think they’re a lot smarter than they are, which is a pretty normal part of the developmental process, but it can lead to poor decision making, especailly when it comes to taking a longer-term view of things.

You only have one shot at obtaining optimal brain development during your youth, so it’s wise to avoid things that can hamper it.

Enjoying your first few cigarettes before becoming addicted and spending the rest of your life trying to stop simply isn’t worth it, but if we could make every teenager understand this, there wouldn’t be any more teenage smokers.

It’s not that easy, unfortunately, but all we can do is try to educate and pass along useful information and hope that some growing proportion of teenagers will take heed to the warnings, and encourage their friends to do the same.

This study shows that nicotine and smoking can have severe impacts on teenage brain development.

3. An Increase in Vaping

This is an interesting point to bring up when discussion why is smoking bad for teenagers?

One of the effects of teenage smoking is that more and more teens have switched over to trying vapes instead.

Vapes would still probably be popular even if smoking wasn’t a thing, but in many cases, vapes rose to popularity as a way to stop smoking in older generations, and this trickled down to teenagers, many of whom picked up a vaping habit without ever smoking cigarettes before that.

The FDA has taken steps against vaping in the United States of America, and many other countries around the world are also looking at teenage vaping as a cause for concern.

Whether or not vaping is a good alternative to smoking, that point becomes irrelevant if the person who starts vaping wasn’t a smoking to begin with, because doing neither of them would be the best option. There are arguments that vaping can be good to help quit smoking, but when teens just start vaping from the start, due to the popularity and accessibility of vapes, this could be an issue.

When you smoke around your friends, you’re exposing them to second hand smoke. Whether this means you’re smoking near them at someone’s house, or in your car, or whatever. You probably don’t want to hurt your friends, but that’s what you’re doing when you smoke near them. Even if you’re standing around outside and smoking, secondhand smoke can still be a problem.

Nearly 50% of children and teens in America are exposed to secondhand smoke on a regular basis, which can include at home, at restaurants, or in other public places that allow people to smoke in the area.

Effects of Secondhand Smoke in Teenagers

Why do you smoke? Just because you enjoy it? Is that a good enough reason to not only risk your own health is very serious and real ways, but also to risk the health and safety of your friends and family, not to mention even strangers who might come into contact with your smoke?

Sure, it’s your choice to smoke or not, but it’s not the choice of the people you come into contact with while smoking.

The CDC says that 5.6 million children who are alive today will have their lifespans reduced due to smoking. That means they’ll miss out on time with their families, experiences, and their later years could be a lot more painful. This isn’t written in stone, because those children could decide to not start smoking, and thus not become a part of these staggering statistics.

Most of them will still make it to their teenage years and adulthood, but their lives will be cut short due to smoking.

Just how much is 5.6 million, anyways? Well, if an average third grade classroom has about 27 kids, that means 2 of them will suffer fatal consequences of smoking. That’s 1 out of every 13 kids alive in the united states.

Reducing the Effects of Teenage Smoking: Is It Possible?

The only practical way to reduce the effects of teenage smoking is to help teenagers stop smoking.

Some people wonder why teenage smoke is more concerning than when adults smoke, and the truth is that it’s because we hope that teenagers would be able to avoid this trap by now. Teenagers certainly smoke less than previous generations, but that still leaves a lot of kids who are setting themselves up for a lot of negative effects of teenage smoking, so until that number reaches 0, it’s worth pressing forward.

Smoking as a teenager used to be seen as a rite of passage in many circles, especially when it was seen as “cooler” to smoke. That image is changing over time, we don’t see as much smoking in movies and pop-culture, and more and more teens will ridicule their friends when they start smoking.