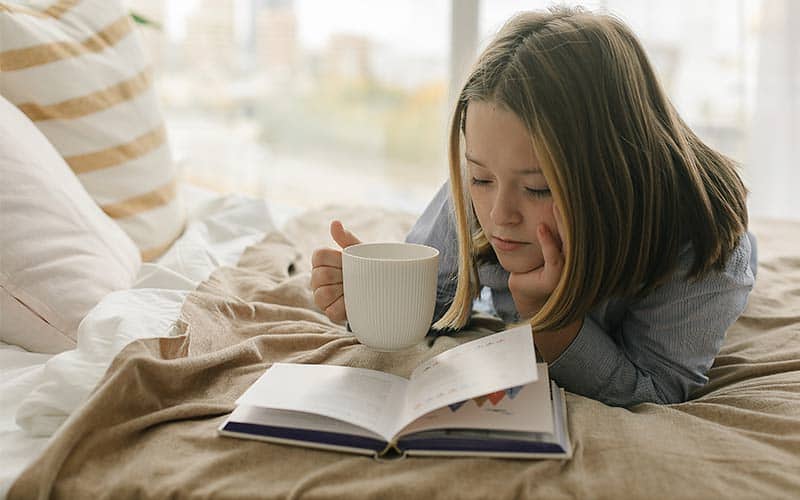 There are tons of contemporary and modern books and novels that are must-reads right now, and will stand the test of time for future generations, too. But today, we’re looking at the ones that are already considered classic teen books, not the classic books for girls of tomorrow.

Some of the themes or topics may feel a bit dated, so it’s important to contextualize older literature and other forms of art, and to remember they were created during their time, but there’s still a lot that can be learned from them.

Plus, part of what makes a classic book for teen girls, in many cases, is the ability for it to stand the test of time. For every “The Great Gatsby”, there are 10,000 other books that were published the same year that have been completely forgotten and aren’t considered classic books for teen girls.

This type of list is subjective, so if we forgot some of your favorites, it’s bound to happen. If you’re helping to encourage a teen girl to read more, these classics are a pretty decent starting point, but for a new reader, sometimes something a bit more modern will work best. For a serious book worm, these are all must-reads, which is why they are classic books every teenage girl should read.

Some people have pointed out certain similarities between Jane Eyre and Twilight, although others have said that these comparisons feel like a bit of a stretch. It’s not a huge stretch to think that the author of Twilight may have pulled some inspiration from a classic piece of literature that deals with similar age groups and topics, though, is it?

This classic novel for teenage girls covers her relationship with an abusive family member, the struggles she has at school, her love for a man, and more. These are all things that are still perfectly relatable for a teenage girl in today’s world, which is part of what makes it such a classic.

Little Women is a classic coming-of-age tale that centers around four sisters, who are named eg, Jo, Beth, and Amy March. It takes place during the Civil War, and discusses many of the struggles that are faced by young women to this very day, along with social issues such as poverty and the hardships of their time.

In addition, it deals with exploring and overcoming one’s own character flaws. Each of the sisters has a particular issue they learn to overcome, which is explored by the events of this classic teenage novel.

The events of the novel reveal the various shortcomings of each sister, and how they work to overcome them. It’s an interesting and must-read book for teen girls, especially for more introspective young ladies who may learn about themselves through the process of reading Little Women.

Jane Austen’s Pride and Prejudice follows the life of a woman named Elizabeth Bennet as she navigates the world of British Regency. It takes place in a fictional town, and deals with five daughters and their journey through adapting to their lives, courtship, and family life.

This is a classic in every sense of the word, and one of the first novels that comes to mind when you think about classic books every teenage girl should read. The story and themes from this book have been very infleuential, and there have been many adaptations and re-tellings for this story that has truly proven itself to not only pass the test of time, but also to remain wildly popular, having sold tens of millions of copies over the court of hundreds of years.

To Kill a Mockingbird

This timeless yet ever-relevant tale takes place through the eyes of a young girl, aged somewhere between six and nine years old, named Scout.

There are comedic elements here, drama, suspense, and an interesting look at the family life of a father of two children whose wife passed away when they were very young. Atticus Finch is the father of Scout and her brother Jem. Jem is aged ten to thirteen years old in To Kill a Mockingbird.

A yough childhood makes Scout mature and strong for her age, and elements of this novel will be very relatable to any young women who have lived through similar difficult situations, especially watching a single father do his best to raise kids while also maintaining his career and doing the right thing in the face of adversity.

The novel Rebecca features a protagonist who is unnamed. It’s a woman who tortures herself with comparisons to her husband’s first wife. She deems herself to be less pretty or beautiful than his first wife, and questions why he loves her, and this is a subject of great insecurity for her.

This novel demonstrates that women have value in things other than their looks, and that a woman’s physical appearance isn’t the only thing that she has to offer to the world, let alone to her husband.

This can be a very important message for young women to learn and to see normalized in literature, especially in the context of a classic novel for teen girls.

This is the most recently published novel for teen girls that we’re going to feature here today because Tuck Everlasting was published in 1975. Nonetheless, five decades is plenty of time for a piece of literature to achieve the status of “classic”.

Tuck Everlasting is more of a children’s novel than others on this list, but it’s still great for people in their teenage years to read, it’s just an easier read – that doesn’t mean the themes are any less relevant or interesting.

Tuck Everlasting tackles the theme of immortality, and in turn, mortality. At 139 pages, a motivated reader can finish it off in under a day, so it’s great to take on a long car ride or a trip to the cabin if you want to get some reading done.

Those Were MY Classic Books Every Teenage Girl Should Read

Are there countless other classic novels out there? Yes.

Are there other novels every teenage girl should read? Yes.

Is it possible to make a complete list of every single classic novel every teenage girl should read? Maybe, but that’s a tall order…

If this list feels kind of cliche, that’s because that’s kind of what people would expect from a list of classic novels, right? The goal here isn’t to have some obscure recommendations that most people haven’t heard of, it’s to push you towards reading some of the classics that you’ve been hearing about your entire life.

Looking for something different? Check out fantasy books for teens.

Whether you’re starting with the classics, or circling back after taking an interest in reading via some more modern novels, there’s a lot to enjoy within the pages of these classic books every teenage girl should read.