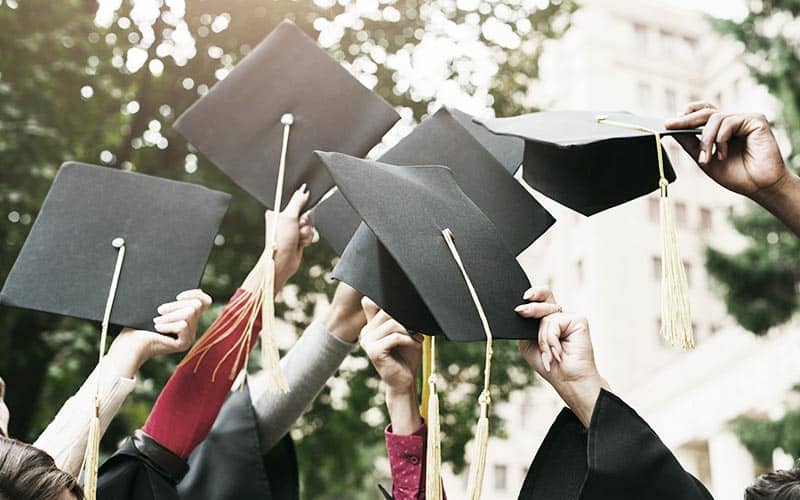 If you’re already 16 and you haven’t been taking steps to graduate high school early already, then it’s probably a bit too late to graduate when you’re 16, since this is something that you need to start planning as soon as possible and it also might depend on which month your birthday lands on compared to the school year.

Either way, you can graduate high school at 16, or you might not quite make the cut, but that doesn’t mean you can’t still work towards graduating early.

Can You Graduate High School at 16?

Yes, You Can Graduate High School at 16 Years Old.

By taking classes early and as soon as you can, filling up your schedule with less breaks/spares in between other classes, and taking challenge exams for topics you’re already proficient in, it’s absolutely possible to graduate high school early, even when you’re 16!

With this head start, you could get an even bigger head start on your college, university, or other post-secondary plans or you could take some time off.

Many students will take a year off after high school then decide what their next move is when they’re 19 or so. If you graduate high school at 16, you can take two years off and still only be 18 when it’s time to decide about getting a full time job or going to school again. In other words, you can take twice as long of a break, and still be a year ahead of some of your former classmates.

Should You Graduate High School at 16 Years Old?

You can graduate at 16 years old, but should you? This is something that really varies from person to person.

Some people enjoy the high-school experience and they like going through each year with their peers, ultimately graduating at the same time and at the same ceremony as a lot of the people they grew up with…

But that’s not for everyone. Some people would rather get in and out, and rather than take spares and have empty courses in their schedule, they’d rather laser-focus from the very start and finish things off as quickly as possible so they can get on with the rest of their life.

See also: What can you do at sixteen years old?

The downsides to graduating high school at sixteen years old can be things like losing touch with your friend group and missing out on certain social things, since you’ll have moved on by the time a lot of your old friends are going to high school parties, going on cute first dates, and so on.

This is something to discuss with your school, with your friends, with your family, but ultimately it should be your decision. If someone else is pressuring you into trying to graduate early, that’s not good, it’s a lot of extra efforts for a young person to take on, and these are super big expectations.

If you don’t want to push for this, you shouldn’t do it – but if you do like the idea of finishing high school early and you’re generally pretty good at school and you’re already a bit advanced, this is a lofty goal but it can be very worthwhile to pursuit.

How To Graduate High School At 16 (Or Earlier than Average)

Let’s go over some general and broad information, and just keep in mind that in order to come up with a specific plan to graduate high school at 16, you’ll want to speak to your school division / teachers or guidance counselors or the main office at your school, since they’ll be more familiar with what’s possible and available in your area.

Depending on how your school day is setup, which courses are available at which times, and how much you can take on at once, you can start by simply not taking any spares/breaks, and filling those up with credits that you’ll need instead. This gives you a head-start right out of the gates.

Beyond that, you can work with your school to come up with a plan that can involve challenging certain credits if you’re already knowledgeable enough to pass a course, without going trhough the entire course.

Also, you could get some advanced placements into some courses that you’d normally be taking in a year or two, which lets you get them over with sooner, freeing up your later schedule for even more advanced courses.

In fact, you can even look at certain college or university courses that you can get an early start on while in high school, too, but if your plan is to graduate at 16 or early at all, it’s best to just focus on your high school for now.

You can graduate high school when you’re 16 years old in some very certain and specific circumstances, but it’ll take a lot of work compacted into a short amount of time, however if this is a goal of yours, it should be do-able – depending on where you live.

So, if you want to come up with a plan to finish high school early, talk to your school and see if they can help you put together a plan. If you’ve already started high-school, it’s not too late to take on as many courses as you can manage in order to either graduate early, or to have your last couple of years with a lighter high school course load, which opens up the option to start some AP college and uni classes.