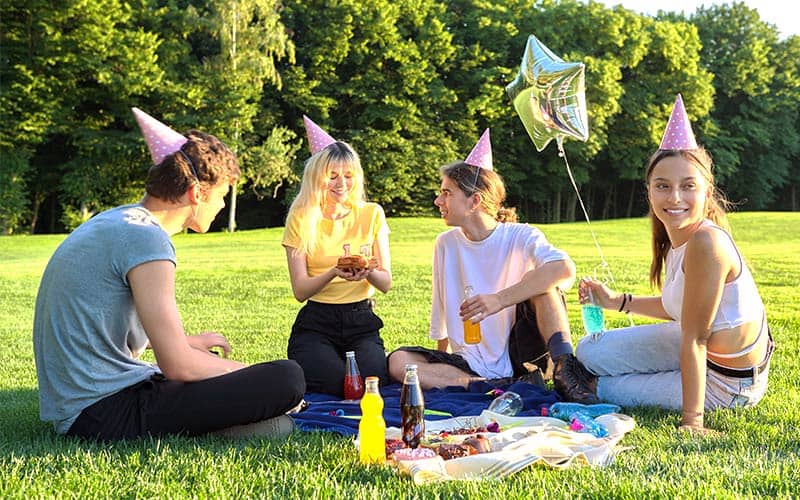 Turning 18 is a big milestone for teenage guys. The specific rules on what you can do when you turn 18 are going to vary from country to country and state to state, though.

For example, in Canada, 18 year olds are able to go to a pub and drink with their friends. In America, however, the legal age for that is 21. Because of this, some American teens will plan a trip to Canada to celebrate their birthdays between 18 and 21, but we’re going to be focusing on age-friendly 18th birthday party ideas for guys.

Turning 18 means you can vote, donate blood, join the military, buy lotto tickets, and a handful of other new privileges.

Want to make a guy’s 18th birthday party memorable, fun, and something they won’t forget (especially since they probably won’t remember their upcoming 21st bday), then keep reading, we’ve got a ton of super fun ideas that were recommended by teen guys, parents, and friends. There’s something here for everyone.

Here’s a list of 18th birthday party ideas for guys including things like decorating, party themes, activities, and more.

Things to do at an 18th Birthday Party for Guys

Is there a Go-Kart track in your neighborhood? Ideally somewhere with the faster style of carts or that’s willing to unlock their full power for you.

If everyone’s old enough and has their drivers licenses, there might even be a race track where you can whip around the course, sometimes in an actual racecar with a driver or sometimes driving yourself.

But go-karts are fun for all age groups, and makes a fun way to spend an afternoon before moving on to a bonfire in a backyard or a more chill evening, or your next adventure of the day.

Any golfers in the friend group? Playing golf might not be as popular amount younger people, but if you don’t have a group of golfing friends, mini golf is always an option, too.

Any concert without a few weeks of the actual birthday is a memorable way to celebrate a guy’s 18th bday with friends.

Presumably the friend group has somewhat similar taste in music, but even if they don’t, a concert can still be a lot of fun.

Going to a Concert

If money’s an issue and not everyone can shell out $100+ for tickets, look at some local bands and shows that might be playing, just make sure to check what the age restrictions are on the venue in case it’s 21+ and you aren’t able to get in.

Some shows are for all ages, some of them are things you can do at 16 years old, some are 18+, some are 21+, so just make sure nobody in the friend group is going to get left out due to their age.

Some guys are into dancing, others not so much. If you or the group of friends enjoys dancing, there are places that 18 year olds can go to dance that aren’t bars.

Concerns, as mentioned above, can be a good place to dance and make some new friends and enjoy a birthday party. Just look for genres of music that are more commonly danced to, find an all-ages show, and have a blast!

Is there a show you’ve been meaning to watch, or maybe going over old episodes of an old favorite?

Either way, getting some friends together and binging watch some TV shows or movies with lots of snacks and some extra activities (or not!) makes for a solid birthday party.

This is especially true for a sleepover party when you can keep the episodes rolling all night.

There are a lot of fun backyard games for teens including corn hole, lawn darts, soccer/football, Frisbee, and a lot more.

If there’s a park or a schoolyard nearby, you can head over with some drinks and snacks, or if you have a backyard then you can setup a little circuit of different games and hold a competition, or just play for fun.

You could visit an escape room in person if that’s available near you, and that’s always a fun 18th birthday party idea for guys. If you want something to do from home, there are a lot of escape room games/escape room board games that you can play in an evening that are designed for groups of people.

These escape room board games are filled with overarching story lines and all sorts of different puzzles and clues that need to be solved in order to advance.

A scavenger hunt for teenagers is always a good time. It takes some effort to prepare it, and if people split off into smaller groups there’s less time spent together as a big group, but this is still a really fun way to pass some time at the party before everyone gets back together and compares notes.

The nice thing about a scavenger hunt is that you can be as creative, wild, outgoing, or challenging as you want with the clues. Just keep in mind some people are a lot more comfortable going up to strangers to ask for a photo and so on, so try to pair people up in a way that each time has people with different strengths to balance things.

Some teens really love the outdoors, and an 18th birthday party idea for guys who like camping is to rent a campsite, get everyone’s gear together, figure out whose going to sleep where, and head out into the wilderness.

If roughing it isn’t as appealing, then camping in a backyard can be a lot of fun, too, especially if someone in the friend group lives in the country or has a larger yard with a bit of seclusion. It gives the teens some space away from parents, while still being safe in the yard.

Dinner parties can be a lot of fun, and there are tons of different ways to have a dinner birthday party.

You could do a taco or pizza bar where everyone picks their own toppings from a buffet of options, and you could even have the same for ice cream and toppings for dessert.

Another option is to have the dinner party catered by a local chef or restaurant, get everyone to dress up in semi-formal, and go fancy with it.

Obviously, you could just go to a restaurant, too. With a large enough group, you can reserve ahead of time and even find a place that will give you a private room.

Before we go over specific things you can do for the party, how about coming up with a theme? It can be a loose theme, or something very specific that’s strictly adhered to. Here are some ideas…

A favorite movie, TV show, or video game is a great place to start with decorating ideas. If we’re talking something like Star Wars or Minecraft, you’ll be able to find themed party supplies at Wal-Mart, Amazon, or party stores.

Does the birthday boy have a favorite color or pattern? Why not a blue themed party, or purple, or even a flannel/plaid themed birthday party?

There are a lot of different types of professional entertainers that you can hire for a teen birthday party, including:

How To Decorate For A Guy’s 18th Birthday Party

If you have a theme, start there. We mentioned the idea of a plaid/flannel theme, and you’ll have no trouble finding table clothes, napkins, and other stuff that fits into that theme.

Start by choosing the area the party will take place, whether it’s at home or somewhere else.

If you’re having the party somewhere else, like an escape room or a bowling alley, you’ll be a bit more limited on how much decorating you can do but you can still fill some balloons and what-not.

The music part is easy. There’s definitely a friend in the group who loves to make playlists and play the DJ role, so delegate this task to them.

Or just throw on the birthday guy’s favorite tunes and be done with it, it doesn’t have to be too complicated unless someone in the group loves making playlists that fit the mood and activities.

To finish things off, here are some rapid-fire ideas for a guy’s 18th birthday party:

That’s it for our 18th birthday party ideas for guys – all that’s left to do is have an amazing time!